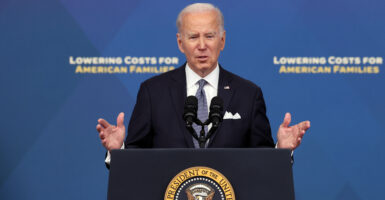 His lawyers "discovered a small number of documents with classified markings in storage areas and file cabinets in my home and in my personal library,” President Joe Biden tells reporters Thursday in remarks at the Eisenhower Executive Office Building next to the White House. (Photo: Kevin Dietsch/Getty Images)

White House counsel Richard Sauber first issued a statement Thursday regarding the discovery of another batch of classified documents in Biden’s possession:

Following the discovery of government documents at the Penn Biden Center in November 2022, and coordinating closely with the Department of Justice, the President’s lawyers have searched the President’s Wilmington and Rehoboth Beach, Delaware, residences—the other locations where files from his Vice-Presidential office might have been shipped in the course of the 2017 transition. The lawyers completed that review last night. During the review, the lawyers discovered among personal and political papers a small number of additional Obama-Biden administration records with classified markings.

Later Thursday, Biden took questions from reporters about the controversy, largely repeating what his lawyer had said.

The president first noted that the garage at his Wilmington residence, where some of the classified documents were stored, is kept locked, saying, “That’s where I keep my Corvette.”

“As I said earlier this week, people know that I take classified documents and classified material seriously,” Biden told reporters. “I also said we are cooperating fully and completely with the Justice Department’s review. As part of that process, my lawyers reviewed other places other documents from my time as vice president were stored, and they finished the review last night. They discovered a small number of documents with classified markings in storage areas and file cabinets in my home and in my personal library.”

Garland initially named John Lausch, a Trump-appointed U.S. attorney for the Northern District of Illinois, to review the matter. Some of the classified documents reportedly pertained to Iran, Ukraine and Britain.

Hur was an assistant U.S. attorney in Maryland under both President George W. Bush and President Barack Obama. He returned to the Justice Department during the Trump administration as the principal associate deputy attorney general. In 2018, Trump nominated Hur and the Senate confirmed him as U.S. attorney for Maryland.

“I will conduct the assigned investigation with fair, impartial, and dispassionate judgment,” Hur said in a public statement. “I intend to follow the facts swiftly and thoroughly, without fear or favor, and will honor the trust placed in me to perform this service.”

The matter prompted comparisons to an ongoing Justice Department investigation into classified information that former President Trump kept at his private residence in Mar-a-Lago. After the FBI raided that Florida estate Aug. 8 and seized documents, Garland named a special counsel, Jack Smith, to investigate the matter.

In an interview with CBS News’ “60 Minutes” that aired Sept. 18, Biden showed no patience with the allegations against Trump, who held federal office for four years compared to Biden, who served for 36 years as senator and eight as vice president.

“How that could possibly happen, how one anyone could be that irresponsible,” Biden told correspondent Scott Pelley, who had asked what the president thought when he saw an FBI photo of classified documents stored at Trump’s Florida residence. “And I thought what data was in there that may compromise sources and methods.”

House Speaker Kevin McCarthy, R-Calif., said Thursday that “Congress has to investigate,” and noted that discovery of the first batch of documents Nov. 2 in Biden’s former personal office at the Penn Biden Center for Diplomacy and Global Engagement in Washington was shielded from the public until after the midterm elections Nov. 8.

“We are finding out now, after being sworn in, that this was discovered before the election–another faux pas by the Biden administration of treating the law differently based upon your political beliefs, treats President Trump one way and treats President Biden another way,” McCarthy, sworn in Saturday as House speaker, said during a press conference at the Capitol. “That’s why we had to provide a new entity from our Church-style [committee] to look into the weaponization of what is going on, if you want an equal [application] of the law to all Americans.”

McCarthy was referencing the late Sen. Frank Church, D-Idaho, who led a post-Watergate investigation into abuses by the FBI and the intelligence community in the 1970s.

A reporter asked the House speaker whether the Biden documents would be investigated by the newly created House select subcommittee investigating “weaponization” of government agencies.

“It could go through that committee or others, but I think Congress has to investigate this,” McCarthy responded.

This story was updated to included a statement from Robert Hur.

Ken McIntyre contributed to this report, which is a developing story that will be updated.