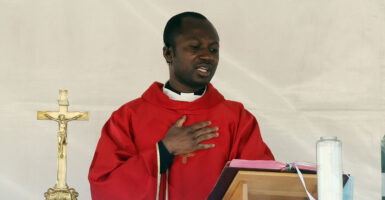 The Rev. Bright Appiagypi-Podkye celebrates Sunday Mass, albeit with audio provided by cellphone as parishioners remain in their cars in the parking lot of the Parish of Saint Agnes Cathedral on May 31 in Rockville Centre, New York. (Photo: Bruce Bennett/Getty Images)

“Religious Liberty in Crisis: Exercising Your Faith in an Age of Uncertainty” is the provocative title of a new book by former U.S. Solicitor General Ken Starr.

He also explains why it’s important for every American to know his or her First Amendment rights to free exercise of religion and how the faithful can resist the encroachment of secularism.

Ken Starr: Oh, thank you, Rachel. So good to be with you.

Del Guidice: Well, it’s great to have you with us. So, you’re releasing a new book. It’s called “Religious Liberty in Crisis: Exercising Your Faith in an Age of Uncertainty.” Can you just start off by telling us about the book?

Starr: Yes. The book was inspired by the pandemic when we were seeing governors and mayors issuing unprecedented orders. Obviously, we had an unprecedented crisis, or at least unprecedented for the last century during the lifetime of all of us here. So I was moved to say we need to recapture first principles of our constitutional order, including our very first freedom, religious liberty.

In the book, in 170 simple, easy-to-read pages, I identify six great principles of religious liberty that should bind all people of goodwill together in saying, “Why don’t we just adhere to these six great principles that are embedded in our constitutional jurisprudence? Here they are. Easy to understand.”

I use examples and I hope that individuals, especially when freedom is threatened, will say, “Wait a second. You know, that is completely inconsistent with the great principle of noncoercion or of freedom of conscience.” Those are two of the six principles that I identify as really fundamental to our constitutional life together in this great republic of ours.

Del Guidice: You talked about the situation regarding COVID and all the different regulations that were handed down. When you look at the situation as a whole in regards to attacks on religious liberty in America, what do you see as some of the biggest threats?

If it’s enacted—and that’s a very big if, but it passed the House—if it’s enacted and signed into law by President [Joe] Biden, then there will be a complete wiping out for purposes of that act, religious freedom of conscience.

Del Guidice: A lot of people talk about, “Oh, it’s about rights for people to be on the sports teams they want to be on.” But I think, and as you highlight, what a lot of people don’t realize is, for example, it would allow biological males on women’s, or boys and males on women’s or girls sports teams and in their locker rooms. So there’s so much more here, as you highlight, than I think what is getting reported about the legislation.

Starr: That’s exactly right. We don’t know the full ramifications, but what we can look ahead to, it doesn’t take a crystal ball to see that what really is a threat is the idea of freedom of association and freedom of conscience, our ability to decide, within limits. Obviously, one can’t say, “I’m not going to serve you at all in my bakery because I don’t approve of the way you look,” etc. We’re way beyond that as a society.

But what we are talking about are specific kinds of acts saying, “Oh, I don’t just want to be able to be served in your shop. OK, you do do that. I now want you to celebrate this particular occasion.” Right? For example, a change of gender. “I want you to celebrate that.” “Well, I can’t do that,” … comes the response in conscious. Well, guess what? You’re now in violation of the terms of the Equality Act.

So this is going to play out a number of ways, including on the playing fields and restrooms and so forth. These are realistic concerns that need to be addressed in a slower process, not the rush that we saw through the House of Representatives, but through a very slow, deliberate process so we at least understand the ramifications because they are huge and frankly, they are unprecedented.

Starr: People should know their rights because increasingly they’re under assault. The Supreme Court just decided a case favorably 8 to 1 in favor of a young man, an evangelical Christian of Nigerian, African descent. He was sharing his faith on this public college campus in Georgia. The authorities said, “You can’t do that. You’re violating our speech code.”

Well, he then repairs, as he should have, to a wonderful law firm called Alliance Defending Freedom. They file a lawsuit, and guess what happened? The college almost immediately changed its anti-speech, anti-religious freedom policies.

The case went on to involve a somewhat technical, but nonetheless important, issue. But here’s the point. If we want to have freedom in this country, we’re now going to have to stand up for it. We can’t just assume that our freedoms will now be protected by local and state officials, or even by Congress. To the contrary, now those state and local officials all too often are actually threatening our religious liberties.

Del Guidice: We’re going to get back to the book, but I wanted to talk a little bit about your experience and any reflections you have on that in terms of religious liberty. As a former solicitor general, was there anything in particular you learned in this role about the importance of religious freedom and the thoughts to it?

Starr: Yes. I had one case that involved this very issue of equality, but the equality of treatment of religious groups. I argued alongside Jay Sekulow in favor of the constitutionality, what was called the Equal Access Act of 1984, signed into law by President [Ronald] Reagan.

What that did was to assure religious clubs—say a Jewish club, a Christian club, and so forth—that those clubs could meet on a public school campus, I’m talking about high schools, on the same basis, same footing as the chess club or the French club.

In so doing, the school inadvertently was violating the free exercise clause and it was in the process showing hostility to religious groups, saying, “Chess club, we love you. Religious group, we don’t love you.”

The Supreme Court [upheld] Congress’ action here and the action of President Reagan said, “School, please, you can’t discriminate against religious activity going on in the schools.” But the school district took it all the way up to the Supreme Court because of its, frankly, boneheaded interpretation of the establishment clause. Those misunderstandings are all too common, even to this day.

Del Guidice: How would you say Americans can work to protect their faith and their religious liberty despite the challenges that come against them?

Starr: First, inform ourselves. We need to educate ourselves.

Think of Miranda warnings, right? That’s one of the things that the Supreme Court said in the 1960s individuals have to know their rights. If they’re confronted by the police, they’re taken into custody, they need to be informed of their rights. Well, we need to inform ourselves of our fundamental rights under the First Amendment.

So self-education, just the way Abraham Lincoln did and countless other Americans have done it over time. We educate ourselves and that’s one of the things I hope this book will be, a tool of self-education. Then you’ll be prepared to say, “Aha, I see what’s going on here. There’s a violation of the great principle of church autonomy or the autonomy of that religious school. They can’t do that.”

That was a principle that was articulated by the Supreme Court of the United States, telling the Obama [Equal Employment Opportunity Commission] and the Obama Justice Department, “You are riding roughshod over the religious freedom of this church school in coming in and trying to say, ‘You cannot fire this particular teacher.’ Go away, EEOC.”

Now, it may sound harsh, but that is one of the great principles of religious liberty that has been protected. That was a nine to nothing decision of the Supreme Court in favor of religious liberty. That opinion being joined by Justice Ruth Bader Ginsburg, now deceased, and Justice Sonia Sotomayor.

Del Guidice: Well, this is a bit of a hypothetical, but I think it’s something that is really [important] to discuss, what do you foresee as happening, potential threats to religious liberty, if government officials continue to do overreach and these acts of overreach really aren’t met? What do you see as potential outcomes of that?

Starr: I see a potential outcome as an overriding of freedom of conscience. …

For example, health care providers. Whatever one’s view is on abortion, we came to a consensus in this country, not everybody agreed with it, but it was a very peaceful consensus, that is taxpayers should not have to fund elective abortions. The so-called Hyde Amendment from now several decades ago, that is about to be written off the books. “No, you must provide abortions in this Catholic hospital or another religiously affiliated hospital.”

The city of Philadelphia said, “You’re no longer going to be a service provider for our very needy children here in Philadelphia even though you have been providing these services for over one century. We’re yanking your license. You’re out of this business.” Why? Because they were not able, under Catholic social teaching, to place children in nontraditional homes.

I think this is the ultimate question, can’t we in a pluralistic society agree to disagree, especially when we’re talking about a freedom of conscience based upon religious belief that is sincere and well settled and well understood through millennia of the three great Abrahamic faiths? Let’s live together peacefully and respect one another and just agree to disagree. But we don’t have to be so punitive, which is what I think the laws are increasingly punitively directed at individuals and institutions of conscience.

Starr: Oh, thank you. So good to be with you.