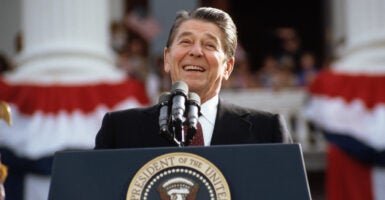 President Ronald Reagan, campaigning for a second term of office, smiles during a rally speech at the California State Capitol the day before the 1984 presidential election. (Photo: Wally McNamee/Corbis/Getty Images)

Today, America has a choice of two paths. We can embrace the foundational principles that created this nation of limited government and individual liberty. Or we can veer down the path of bigger, more intrusive government that promises to solve all our problems if we just turn over more of our freedom and our paychecks.

The difference between the two paths recently has become even starker as those on the left have gotten more radical. They have sought to destroy the lives of those who disagree with them, rewrite history to teach our children that America was illegitimate from the start, and express solidarity with those rioting across the country.

This future-altering choice reminds me of 1964 when Ronald Reagan spoke about a similar decision the American people faced. “A Time for Choosing” was Reagan’s indictment of big government policies and the deceptive lure of socialism. Amazingly, his warnings are just as applicable today as they were nearly six decades ago.

He gave “A Time for Choosing” shortly after President Lyndon Johnson introduced his “Great Society” proposal, which created new welfare programs, expanded food stamps, gave birth to Medicaid and Medicare, and inserted the federal government into local education, among other massive expansions of government.

Like conservatives of today, Reagan expressed a grave concern that too many Americans saw more government as the solution to their problems, even though by 1964, history had already shown that bigger government actually was the problem.

For example, he spoke of how government programs to eradicate poverty hadn’t solved much of anything: “If government planning and welfare had the answer and they’ve had almost 30 years of it, … shouldn’t they be telling us about the decline each year in the number of people needing help?”

In recent years, we’ve spent about a trillion dollars a year on federal welfare programs. Divide that up among the 40 million or so Americans considered poor, and we could have given a family of four $100,000 a year.

Yet, the poverty rate has stayed about the same as it was when the War on Poverty began in 1964. Tragically, most welfare programs have only been successful at creating perpetual reliance on government.

Reagan also pointed out that, despite the fact that Washington was collecting unprecedented amounts of money from taxpayers in 1964, it never seemed to be enough: “Today, 37 cents of every dollar earned in this country is the tax collector’s share, and yet our government continues to spend $17 million a day more than the government takes in.”

Washington’s poor fiscal restraint has only gotten worse. In 2019, the government spent $2.7 billion a day more than it took in, and currently, the national debt exceeds $80,000 for every man, woman, and child.

Yet today, despite years of failures, just like back then, the left continues to promote policies that usurp our freedom, harm our economy, endanger our security, and create an unhealthy dependence on government.

Today, they’re proposing government-run, single-payer health care and cutting our military when those who want to do us harm are increasing theirs.

They want to defund the police across America, putting out the neighborhood welcome mat for criminals everywhere.

Their proposals would guarantee every person in America access to free health care, free college, and even a free paycheck—paid for with massive tax increases.

Reagan urged Americans to resist the lure of these types of big government programs coming from their leaders.

He said that the issue was “whether we believe in our capacity for self-government or whether we abandon the American Revolution and confess that a little intellectual elite in a far-distant capital can plan our lives for us better than we can plan them ourselves.”

As polls show more Americans warming up to socialism, conservatives need to take a few lessons from The Great Communicator.

We must better convey how policy solutions based on the principles of free enterprise, limited government, individual liberty, traditional American values, and a strong national defense are what made this nation great—and what will continue to make life better for all Americans.

This is another time for choosing for America, and the path we choose will affect generations of Americans to come.

Those who promote socialism haven’t given up on their plans for America, and neither can we.

If we are able to succeed in taking a coherent, compelling argument to the American people that spells out why free market, conservative solutions are better for them than the false promises of socialist utopianism, we will, in Reagan’s words, “preserve for our children this, the last best hope of man on earth.”

That must be our mission, and the future of America surely depends on our success.