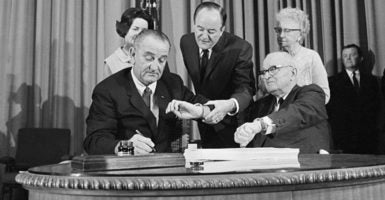 President Lyndon B. Johnson signs the Medicare bill on July 30, 1965, as Vice President Hubert Humphrey and former President Harry S. Truman note the time. The measure was among many making up what Johnson called his vision for a Great Society, which a new Heritage Foundation report calls not so great for education reform. (Photo: Getty Images)

President Lyndon B. Johnson’s vision for a Great Society unleashed an army of bureaucrats on American schools but produced little or no improvements to public education in 54 years, according to a new report published by The Heritage Foundation.

The report, titled “The Not-So-Great Society,” delves into the impact of Johnson’s string of initiatives—among them Medicare, Medicaid, and various social welfare programs—on American education. Scholars from the leading think tank, as well as some outside experts, contributed to the report.

One-third of Johnson’s touted War on Poverty invaded classrooms across the United States, which, the president said in 1965, is where “your children’s lives will be shaped.”

“The federal Head Start program had as its goal—to quote Lady Bird Johnson—to ‘rescue our disadvantaged children’ [and] utterly has failed in that mission,” Lindsey Burke, director of Heritage’s Center for Education Policy, told an audience gathered Monday in Washington for the think tank’s annual President’s Club meeting.

“We have spent $240 billion on Head Start since it was launched as a small summer program in 1965,” Burke said during a panel discussion about the report. “We have seen no impact on parenting practices, children’s social and emotional wellbeing, their access to medical care, nothing. What we have today, that legacy, is a $9 billion federal jobs program, to be honest. Head Start employs 255,000 adults.”

The 1965 Elementary and Secondary Education Act also expanded the federal government’s role in education, with the stated goal of closing the achievement gap between rich and poor students. But it hasn’t achieved that goal, Burke said.

“Since 1965 when the Great Society launched, we have seen federal education spending quadruple, and yet that achievement gap remains [the same] between poor children and the more affluent kids today, a four-year gap in learning. We have not moved the needle at all,” Burke said.

The problem hasn’t just been K-12, as 90% of all student loans to pay for college now come from the federal government.

“That means if a student defaults or if there is generous loan forgiveness, it will come directly from the taxpayers,” Burke said. “Today, a slightly lower percentage of low-income students attend college than in 1965. So, it has failed on that metric.”

He said 56 studies showed school choice had a positive result on civic engagement, 34 studies found no difference in impact between public and private schools, and three found private schools had a negative effect.

“Basically, access to private schooling makes young people more, and not less, civically minded. Really, the summary is that school choice is good. It’s great for our society.”