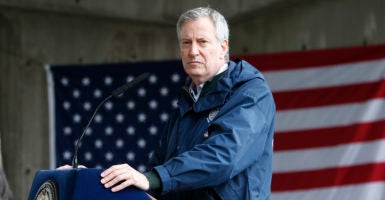 “There are no libertarians in a global pandemic.” So goes the smug punchline of large-government advocates who point to the necessity of collective action in the face of an unprecedented global crisis. Without government, they say, we’d all be dead.

Few libertarians would disagree. The hardcore libertarians at Reason magazine aren’t spending their days fulminating over the evils of government-required lockdown orders in the face of a fast-spreading, deadly disease. That’s because they, like all other sentient human beings, recognize that collective action is sometimes necessary.

But here’s the dirty little secret: Institutional failures during this pandemic are more indicative of what our politics should be during non-pandemic situations, not the blunt-force ability of the government to shut down the global economy and force us all to stay home.

The question isn’t whether government has power. Government is power. The question is how and when to apply that power. And what we’ve seen is that government sucks at everything, even the most basic things it is supposed to do well.

Democrats and the media like to pretend that government’s failures in this process aren’t endemic to government control. They like to blame such failures on Republicans, and on President Donald Trump specifically. But that’s just not the case.

Human beings are fallible, stupid, gullible, and self-interested. Human beings who have the power of government to back them are not less human for having that power. Their humanity just has direr consequences, which is why in non-emergency circumstances, checks and balances are absolutely necessary.

Take, for example, the early days of the pandemic. Democrats say Trump was slow to respond to the incipient threat. But so were Democrats.

House Speaker Nancy Pelosi recently declared, “As Trump fiddles, people are dying,” but in late February, she was walking the streets of Chinatown, encouraging citizens to join her.

New York Mayor Bill de Blasio has ripped Trump for his supposed downplaying of the virus, but de Blasio spent a month poo-pooing its threat. When confronted about that simple fact by CNN’s Jake Tapper, de Blasio conveniently suggested that we stop looking backward.

Why should we trust these people, exactly?

Or take the roots of America’s inability to provide the health care resources necessary to hospitals across the country.

While state and local governments were frittering away billions of dollars on useless government spending, they did precisely nothing to prepare for exactly the sort of black swan events for which governments were presumably invented.

The Centers for Disease Control and Prevention spent a month failing to produce useful tests and prevented physicians in Seattle from performing proper testing, even after Trump issued a travel ban on China.

For years in advance, members of the federal government of both parties had been warned about the need for ventilators and masks. No one produced or stockpiled them.

The Food and Drug Administration’s red tape prevented the quick development of new measures to deal with the novel coronavirus.

Why should these people control our lives, when the threat of the red death isn’t hovering on our doorstep?

And those who have used this pandemic response—one of the rare times we need a giant, lumbering idiot to intimidate people into preventing mass infection of one another, and to borrow the money necessary to redress the injuries thus incurred—as a rationale for a government-run “new politics” should have their heads examined.