21 States Move to Support This Praying Coach for Round 2 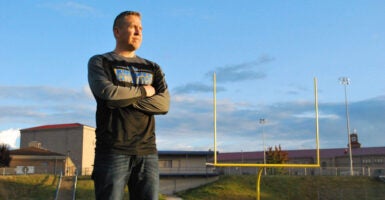 Twenty-one states are showing their support for Joe Kennedy, the former public high school football coach who was fired for praying on the field. (Photo: First Liberty Institute)

Remember the case of Joe Kennedy, the Marine Corps veteran-turned-high school football coach who was suspended, then fired, halfway through the season a few years ago for thanking God in silent prayer for his ability to be a coach? Well, he’s back in the 9th U.S. Circuit Court of Appeals, pleading again for his right to pray on a school football field.

This time, 21 states have filed an amicus (“friend of the court”) brief urging the appeals court to find in Kennedy’s favor. The swath of mostly red states includes Alaska, South Carolina, Tennessee, and Texas (where the case began)—although Arizona and Indiana, blue states, made the list, too.

“No reasonable person would believe that Coach Kennedy’s silent prayers on the football field are government endorsement of religion, so the school district cannot justify its actions under the Establishment clause,” South Carolina Attorney General Alan Wilson said in a statement about the brief. “The school district’s action demonstrates hostility toward religion. It’s basically saying that public employees cannot exercise their right to worship without fear of losing their jobs.”

The amicus brief calls out the 9th Circuit for its previous ruling about Kennedy’s prayer, which centered on the meaning and use of the so-called Establishment Clause, the clause in the First Amendment to the Constitution that prohibits the establishment of religion by Congress.

The brief in support of Kennedy also argues that “curtailing religious liberty is harmful to public employees and government employees alike.”

Part of the brief reads:

A competitive salary, excellent health insurance, and the highest honor will not induce qualified candidates to pursue public employment if accepting the position means compromising their dearest and most personal convictions. For most Americans—indeed, for most people across centuries and cultures—those convictions include religious commitments.

If government employers (or the courts) place unnecessary and overbroad restrictions on the ability of employees to express their religious convictions in the workplace, legitimate religious expression will be chilled. And that chilling effect will, in turn, deter highly qualified candidates who desire to work in an environment that allows them to preserve their personal integrity.

The amicus brief demonstrates a concise, straightforward interpretation of the meaning of the Constitution’s Establishment Clause, especially for public employees such as Kennedy, and its importance to the public.

It’s well worth a read to see a different perspective than the 9th Circuit had on the Establishment Clause and Kennedy—at least the first time around.

Kennedy coached football at Bremerton High School in Washington state, praying silently on the field after every game. A school administrator even complimented the coach’s spiritual leadership through prayer.

Administrators of the school district later told Kennedy to stop praying, and after several rounds of attempted compromise via attorneys at First Liberty, a law firm that specializes in First Amendment law in Texas, the school suspended Kennedy, then refused to renew his contract.

After the 9th Circuit ruled against Kennedy in 2017, he appealed to the U.S. Supreme Court. Although his petition was denied, some justices had a lot to say about it. Justice Samuel Alito—joined by Justices Clarence Thomas, Neil Gorsuch, and Brett Kavanaugh—expressed concern about the 9th Circuit’s logic about the Establishment Clause.

“What is perhaps most troubling about the Ninth Circuit’s opinion is language that can be understood to mean that a coach’s duty to serve as a good role model requires the coach to refrain from any manifestation of religious faith—even when the coach is plainly not on duty,” Alito wrote. I hope that this is not the message that the Ninth Circuit meant to convey, but its opinion can certainly be read that way.”

I’m glad to see Kennedy’s case before the 9th Circuit again, if it resolves some of the issues the Supreme Court instructed both parties to handle. I’m especially heartened to see so many state attorneys general—representing nearly half the states—support the right of a faith-filled person to act on his religious beliefs while in “secular” employment.

It’s not only Kennedy’s religious right, it’s all of ours. What he did is far from a violation of the Constitution. But in fact, it’s good for society to see a variety of people of faith in the public sector, and robust belief, at that.