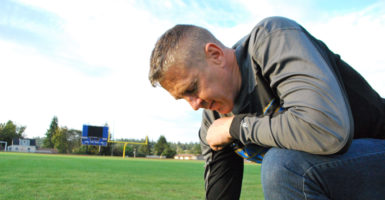 Coach Joe Kennedy was fired by the Bremerton School District for praying with his players. (Photo: First Liberty Institute) 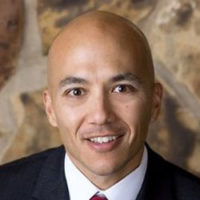 The Supreme Court decided last week to not review the case of Joe Kennedy, a Washington state football coach who was fired for praying with his players.

But the game isn’t over yet. We have reason to believe the Supreme Court might revisit the case and rule in Kennedy’s favor.

Kennedy made headlines after he was fired by the Bremerton School District because fans and students could see him take a knee in silent prayer after football games.

So Kennedy’s attorneys with First Liberty Institute and Kirkland & Ellis LLP took action. We asked the Supreme Court to reverse a decision by the U.S. Court of Appeals for the 9th Circuit that allowed the school district to fire Kennedy.

Although the Supreme Court declined to hear our case,  all may not be lost.

In sports, as in life, the best team doesn’t always win. Sometimes things just don’t go your way. Just ask the New Orleans Saints or the Kansas City Chiefs. Once the court decides not to hear your case, it’s usually game over.

In any given year, nearly 8,000 cases are appealed to the Supreme Court, but the court may only agree to hear 80 or so of those appeals. Those aren’t great odds.

In Kennedy’s case, although the court decided not to hear his case, it’s more like halftime.

In a relatively rare move, four of the court’s justices—Samuel Alito, Clarence Thomas, Neil Gorsuch, and Brett Kavanaugh—issued a statement explaining that the court cannot make a decision on whether to hear Kennedy’s appeal because important factual questions remain unresolved. And depending on how those questions are answered, the court may revisit the case.

But the justices went further, expressing serious concern over the lower court’s decision and its implications for the First Amendment rights of teachers and coaches.

Alito explained that “the 9th Circuit’s understanding of the free speech rights of public school teachers is troubling and may justify review in the future. … If this case were before us as an appeal within our mandatory jurisdiction, our clear obligation would be to vacate” the 9th Circuit’s decision.

The four justices also took issue with the lower court’s rationale that “public school teachers and coaches may be fired if they engage in any expression that the school does not like while they are on duty, and the 9th Circuit appears to regard teachers and coaches as being on duty at all times from the moment they report for work to the moment they depart, provided that they are within the eyesight of students.”

While these four justices may have blown the whistle on the 9th Circuit’s free speech analysis, they appear even more concerned with the case’s religious liberty implications.

“What is perhaps most troubling about the Ninth Circuit’s opinion,” wrote Alito, “is language that can be understood to mean that a coach’s duty to serve as a good role model requires the coach to refrain from any manifestation of religious faith—even when the coach is plainly not on duty.”

In other words, according to the 9th Circuit, any action by a public school coach (or a teacher) that even hints at being religious in nature, even when they’re not on the job, could provide a school district reason to fire that coach.

If left in place, the 9th Circuit’s decision would act as a de facto ban on teachers and coaches from exercising their First Amendment rights anytime. A Jewish coach could be fired for wearing a yarmulke, or a Muslim teacher for wearing a head covering.

Fortunately, there are four quarters in a football game. Nobody declares a winner or loser at halftime. And thankfully, in Kennedy’s case, it appears there is some time remaining on the game clock. We still have a chance to win.

And that’s exactly what we’re going to do, for Kennedy’s sake, and for the sake of religious freedom for all Americans. We plan to get the answers to those unresolved questions that the Supreme Court said it needs to review the case.

In time, we are confident Kennedy will be able to return to the field, and that the First Amendment rights of coaches and teachers will be restored.g