Why a Safe Harbor Is Needed to Protect Gig Workers’, Gig Users’ Safety 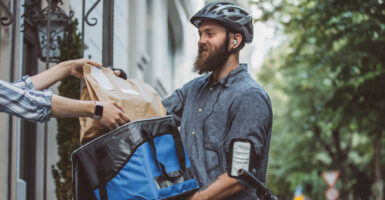 Gig-based companies should be able to improve the health and safety of those who use their services without the threat of those actions being used against them. The Helping Gig Economy Workers Act would help them do so. (Photo: svetikd/Getty Images)

You know there’s something wrong if companies can’t do the right thing without potentially destroying their entire business model.

In fact, many of the ways that gig companies would like to help their partners—which is what gig companies consider people who use the companies’ platforms to earn income—operate safely during the pandemic could be used against them.

During the pandemic, many stores and medical offices are providing masks and sanitizer to their customers and patients to protect their safety as they remain open. Meanwhile, some households kept paying contractors, such as maids, even when they didn’t perform their usual services—which is not so different from an employer paying an employee’s sick leave (except that it’s entirely voluntary).

But while many gig economy companies want to provide things like masks, sanitizer, and support leave to their partners, doing so risks costly lawsuits that could upend their operations.

Groups that want to essentially outlaw gig economy jobs, along with many self-employment jobs, argue that providing safety products or health benefits would make companies “employers” of individuals with whom they partner—a determination that would drastically increase gig companies costs and topple their flexible work model.

That’s why a group of senators has introduced legislation to provide a temporary safe harbor for app-based companies like Instacart and Grubhub, so that they can provide benefits that improve public health without risking their own viability.

Under the Helping Gig Economy Workers Act (which is included in the Senate Republicans‘ Health Economic Assistance, Liability Protection, and Schools Act), gig economy platforms could provide certain benefits—like masks, sanitizer, or support pay—to their partners, without those provisions serving as a basis for those companies being considered “employers” of their partners.

Maintaining the ability for gig companies to partner with individuals, instead of employing them, is crucial to the gig economy’s existence. If gig platforms can’t partner with individuals and instead have to formally employ them, those companies would have to regulate, oversee, and dictate the work conditions of millions of workers over whom they currently exercise almost no direct control.

And it would take away flexibility, autonomy, and income opportunities for workers who earn money on gig platforms.

In many ways, the relationship between gig companies and the individuals who use their platforms for income is like that of a business and its customers.

Similarly, gig economy companies provide a service—a platform that matches people who desire a service to those willing to provide it—and individuals choose whether or not they want to access that service, when they want to use it, and which particular tasks they want to accept.

Gig economy companies and workers have been essential in delivering groceries, medicine, and other items to at-risk individuals and households during COVID-19.

But that would likely not have been possible if gig companies had to act as employers and gig workers as employees.

Imagine if grocery stores, restaurants, and pharmacies had to hire their own delivery drivers and buy company vehicles for them to use when delivering goods?

The process of ramping up such services could have taken months. And purchasing the equipment, buying liability insurance, and providing comprehensive employee training to workers who may only stick around for a month or two may have prevented companies from even trying to meet customers’ desires.

At a minimum, such services likely would have been cost-prohibitive to a majority of Americans were it not for gig platforms.

And imagine if individuals who partner with Grubhub or Postmates had to give up their freedom to choose when they work, for how long, and what jobs they accept, and instead had to commit to a 40-hour work week, could not work for another company, and had to have cameras installed in their cars to ensure they comply with company policies?

Those workers may gain some additional benefits, but they would give up a lot of freedom. Most individuals who “freelance”—whether through self-employment, gig jobs, or contract work—aren’t willing to make that trade.

In fact, over half of all individuals who freelance say that no amount of money could compel them to switch back to traditional employment.

But that is ultimately what labor unions and many policymakers want: for all workers to have to report to a boss—preferably within a unionized company.

That would be a huge loss for worker freedom.

According to the “Freelancing in America” report, 57 million Americans—1 in every 3 workers—freelanced in 2019.

For most of those individuals, freelancing is just a way to make extra money—a side gig.

But more workers are turning to freelancing as their primary jobs.

Over just the past five years, the percent of full-time freelancers jumped from 17% to 28%.

For almost half of those who freelance full time (46%), it’s the only way they can work at all because their health condition or family circumstances prevent them from working for a traditional employer.

And with unemployment likely to remain elevated for some time, people need options for income.

Last year, 76% of people who did not freelance said that they would consider doing so if there were a recession.

Now is not the time to take away income opportunities, to drive up the cost of important services, or to risk public safety.

Gig-based companies have provided essential services to households and essential incomes to workers throughout the pandemic. They should be able to improve the health and safety of those who use their services without the threat of those actions being used against them to destroy their business model.