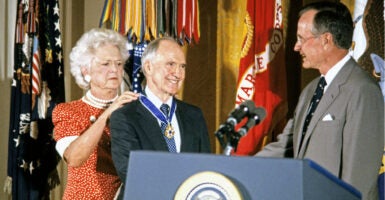 Washington’s foreign policy community lost one of its most notable members this week. Lt. Gen. Brent Scowcroft, national security adviser to Presidents Gerald Ford and George H.W. Bush, died on Aug. 6 at the age of 95 at his home in Falls Church, Virginia.

Scowcroft leaves a distinguished legacy and will be greatly missed.

Scowcroft made his indisputable mark on history, redefining the role of national security adviser as an honest broker, close to and trusted by the president.

He helped Bush navigate the end of the Cold War and relations with the collapsing Soviet Union, a perilous time in global relations. This brought to a peaceful conclusion the conflict with the communist world that the Reagan administration had worked hard to end.

Scowcroft will be remembered for his steady hand during a pivotal era of U.S. leadership, and as an advocate for realism in foreign policy. He was a pillar of the U.S foreign policy world, playing a key role in guiding U.S. policy in the first Gulf War.

Prior to his service in the Bush White House, Scowcroft had a distinguished career in the U.S. Air Force, rising to the rank of lieutenant general.

Scowcroft spent much of his career in Washington holding positions at the Joint Chiefs of Staff; the headquarters of the U.S. Air Force; and the Pentagon. In Washington, a town of politicking and diplomacy, Scowcroft became known for his outspokenness and forthrightness about his convictions.

Scowcroft’s many honors included the Presidential Medal of Freedom in 1991 and Honorary Knight Commander of the Order of the British Empire, awarded by Queen Elizabeth II in 2006. His legacy also includes the Scowcroft Center for Strategy and Security at the Atlantic Council.

Scowcroft was preceded in death by his wife of more than 40 years, Marian Horner Scowcroft, who died in 1995. He is survived by their daughter Karen.