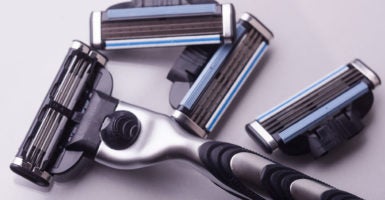 "After a string of male-bashing, transgender shaving ads, the parent company of Gillette got nicked so badly, market experts wonder if the brand will survive," Tony Perkins writes. (Photo: Christophe Gateau/Picture Alliance via Getty Images)

“Your stupid boycotts will never make a dent in a company like P&G,” one liberal scoffed back in January. Turns out, they didn’t just make a dent.

After a string of male-bashing, transgender shaving ads, the parent company of Gillette got nicked so badly, market experts wonder if the brand will survive.

Gillette’s CEO insists the radical activism was “worth the price.” Let’s hope so—because so far, that price is a whopping $8 billion.

To most customers, a razor company dabbling in gender politics never made sense in the first place. Gillette used to be “the best a man can get.” Now the company can’t even acknowledge what a man actually is.

Things for the brand started to unravel earlier this year when P&G gave the green light to a controversial commercial about the culture’s “toxic masculinity.” The idea, CEO Gary Coombe said at the time, was to reach millennials. Weeks into the flop, even he admitted it backfired.

But instead of ditching its politically-charged messages, Gillette dug in deeper. On Father’s Day, the company finally went too far, launching an ad about a dad teaching his “son”—who happens to be a biological girl—how to shave. That did it.

Conservative groups like One Million Moms activated, warning customers that unless they wanted their money to support an ideology pediatricians call “child abuse,” they’d better find another razor.

Based on this quarter’s report, an astonishing number of Americans did.

At least for now, the company’s executives are refusing to blame their liberal politics. Instead, CFO Jon Moeller found another culprit: beards. That’s right. P&G is actually writing off its monumental fail on the rise of facial hair. “Lower shaving frequency has reduced the size of the developed blades and razors market,” he tried to justify on a call with analysts.

Some shareholders might buy that, but most shoppers agree—it’s time for companies like Gillette to look in the mirror. Political activism never pays. Just look at the fanatics at Target and Nike, whose stocks took a nose-dive for offending Americans’ basic sense of decency and patriotism.

Even so, some companies are pressing forward despite the fallout. Just last month, grocery giant Whole Foods surprised everyone by sponsoring drag queen story hour. Even Nabisco’s most famous cookies—Oreo and Chips Ahoy—have spent 2019 waving the transgender flag. But the reckoning isn’t just coming. It’s here.

So the next time someone tries to tell you that shopping your values doesn’t work, or one person can’t possibly make a difference, remember Gillette. It only takes a handful of committed shoppers to send a message.

As former Walmart CEO Bill Simon explained on “Washington Watch,” the “very, very best way you can communicate your concern is with your wallet.” Companies are in the business to make money.

A 3% change in sales of a company or a 5% change in the sales company will make a huge statement. It doesn’t take a lot of people to stop buying product or to stop going to a retailer or a restaurant—or whatever it is—for them to notice, because a couple of percentage points is win or lose for a company.