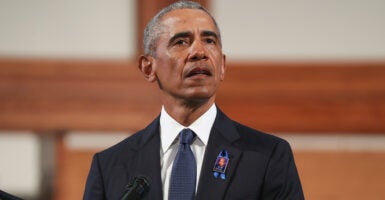 In April of 2005, Sen. Barack Obama took to the floor of the United States Senate and passionately spoke out against Republican efforts to end the filibuster.

Then a rising star in the Democratic Party, Obama noted that despite the pressure partisans might feel, it was imperative to “rise above an ‘ends justify the means’ mentality because we’re here to answer to the people—all of the people—not just the ones wearing our party label.”

Last week, Obama made precisely the opposite argument during John Lewis’ funeral, contending that eliminating a vital check on partisan power was justified as long as Democrats got the policies they desired.

After offering a shamefully dishonest comparison between George Wallace, Bull Connor, and contemporary Republicans, Obama argued that passing a “voting rights” bill was worth stripping away counter-majoritarian norms.

“If all this takes eliminating the filibuster, another Jim Crow relic, in order to secure the God-given rights of every American,” Obama told the congregants, “then that’s what we should do.”

And by “we,” of course, Obama means 51% of Washington should dictate the legislative agenda to the entire country. Why is it a bad idea? Let’s turn to Barack Obama of 2005, who explained that while the American people expected rigorous debate in Congress:

What they don’t expect is for one party—be it Republican or Democrat—to change the rules in the middle of the game so that they can make all the decisions while the other party is told to sit down and keep quiet. The American people want less partisanship in this town, but everyone in this chamber knows that if the majority chooses to end the filibuster—if they choose to change the rules and put an end to democratic debate—then the fighting and the bitterness and the gridlock will only get worse.

One wonders why Obama felt comfortable using a “relic of Jim Crow”—numerous times, in fact—when it suited his political purposes. Why did the senator claim that allegedly racist institution was an indispensable check on power and a bulwark against assaults on open debate? Was this former professor of constitutional law unaware of the filibuster’s history?

Again in 2006, Obama told ABC News that he supported a filibuster of Samuel Alito because he was not only “somebody who is contrary to core American values, not just liberal values,” but had not shown “himself willing” to temper executive power. Considering Obama’s subsequent abuse of that very power, the statement reads especially hypocritically.

When it was expedient, Obama claimed to “regret” participating in the Alito filibuster. But even if we allow that President Obama changed his mind, why didn’t citizen Obama call for the filibuster’s end from 2016 to 2019? Because Obama wants Democrats, who believe they will win 2020, to govern without being encumbered by the minority.

Obama can cloak arguments in grand moralistic terms, as is his wont, but he believes his party is on the cusp of an election victory. It is transparent and crass partisanship.

It’s no coincidence the same politicos clamoring for more direct democracy are the ones who view the Constitution as the biggest impediment to their goals. Those pushing to undo the filibuster—a long-celebrated ideologically neutral procedure that goes back at least to Cato the Younger—exemplify the “ends justify the means.”

The filibuster complements the constitutional checks and balances that have historically made American governance effective. A strong minority has always been a distinguishing feature of the upper house. Because when thin majorities ram through massive centralized federal laws that affect all states, as Democrats plan to do, it not only undermines political stability but self-governance as well.

The blowback to the heavy-handed passage of Obamacare, an event that has a lot to do with the exceptionally frayed and acrimonious tone we see in Washington today, should have been instructive. The more divergent our views become, the more imperative it is to build consensus rather than rely on political domination.

Democrats increasingly favor centralized federal reforms on green energy and single-payer health care and so on. A minority gums up the works. It’s that simple.

When Harry Reid changed the rules on federal judicial nominees and executive office appointments, he didn’t do it for any extraordinary reason, either. He did it for power. Democrats destroyed a norm so they could name some bureaucrats to run the Consumer Financial Protection Bureau (which wasn’t even created until 2011) and the National Labor Relations Board. They seemed to think they would hold power in perpetuity—a conceit of many politicians and parties.

“One day Democrats will be in the majority again, and this rule change will be no fairer to a Republican minority than it is to a Democratic minority,” Obama presciently warned back in 2005. That warning still stands.