14 Images as Body of Rep. John Lewis Returns to Capitol 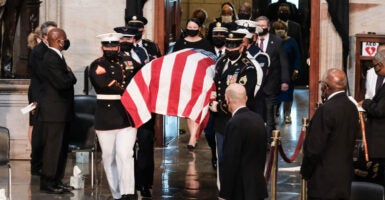 An honor guard carries the casket of Rep. John Lewis, D-Ga., into a congressional memorial service Monday at the Capitol Rotunda. (Photo: Michael A. McCoy/Getty Images)

Rep. John Lewis broke another barrier Monday when, in death, he became the first African American to lie in state in the Rotunda of the U.S. Capitol.

Lewis, who as a young man marched for full civil rights for black Americans with the Rev. Martin Luther King Jr. and championed related causes as a Democratic member of Congress until his last public appearance in June, died of pancreatic cancer July 17 in Atlanta. He was 80.

The Alabama-born son of a sharecropper had represented Georgia’s 5th Congressional District in the House since 1987. Here are 13 more photographs capturing the return of Lewis’ body to his beloved Capitol building in Washington as part of six days of funeral proceedings.