Why Preserving the Legislative Filibuster Is Critical for Conservatives 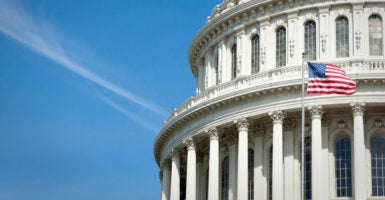 The recent elimination of the Senate filibuster for judicial nominees has sparked some concerns over further erosion of the filibuster. (Photo: iStock Photos)

As it currently stands in the Senate, no judicial nominee—from the lower courts to the Supreme Court—is subject to the filibuster.

In popular parlance, eliminating the filibuster is known as “going nuclear.”

In practical terms, this simply means that there is no longer the need for the Senate to achieve a 60-vote threshold to move to a final vote on the nominee. Cloture—the process for ending debate in the Senate—can now be achieved with a simple majority.

Employing the nuclear option fundamentally changes the way in which the Senate operates. Indeed, the phrase itself was coined by former Senate Majority Leader Trent Lott as a way to describe an alteration he believed would be explosive.

The gravity of going nuclear explains why there was a fair amount of debate and dissent within GOP ranks leading up to the vote—though, in the end, all 52 Republican senators ended up agreeing to make the change.

The comments made by GOP senators in hallway interviews and off-the-record discussions, however, are revealing.

Though uneasy with the prospect of nuking the filibuster for Supreme Court nominees, many within the GOP—and some Senate Democrats as well—feared that it would put a bigger, more frequently utilized filibuster at risk: the filibuster that applies to legislation.

They are right to be concerned.

Despite Majority Leader Mitch McConnell’s promise to keep the legislative filibuster in place, it was McConnell who, just last year, floated the idea of eliminating the filibuster on the motion to proceed to appropriations bills.

(When legislation is considered in the Senate, there are generally two opportunities for the minority party to filibuster—first, on the question of whether or not the Senate should “move to,” or consider, a piece of legislation, and second, on the actual legislation itself.)

As I wrote then, such a move would create a class of “super senators,” empowering some senators at the expense of others in a body founded on the notion that all senators have equal authority.

It also wouldn’t solve the problem. The increased use of the filibuster can, in part, be tied to continued centralization of authority in the majority leader’s office.

If bills continue to be negotiated by only a handful of members, other senators will turn to more aggressive tactics to get their priorities included.

This fact speaks to a larger truth about the role of the filibuster in the Senate. Far from being simply a weapon of obstruction, the filibuster actually forces compromise.

The framers designed the Senate to be a consensus-driven body. If a majority party knows they need to garner 60 votes to end debate on a bill, the necessity of working across the aisle, negotiating, and finding areas of agreement becomes imperative, rather than optional.

Filibuster flows from Founders’ design of a system in which they wanted to make it hard, not easy, for govt to act.https://t.co/DhDakYa5Om

Without the filibuster as a tool of negotiation, the Senate becomes little more than a smaller version of the House of Representatives where legislation reflects the priorities of the majority, with little regard to concerns of the minority.

While that may sound fine to a Republican-controlled government, opinions will surely change with different electoral outcomes.

For conservatives, who are generally always in the minority even when their party is in the majority, the loss of the legislative filibuster would be felt even more acutely.

The filibuster remains one of the most powerful tools conservative senators have to make their priorities known. It provides a critical amount of leverage to conservative ideas that might otherwise be ignored.

To put it bluntly, the right to filibuster gives conservatives a place at the negotiating table, even when their own party would prefer they be elsewhere.

>>> Getting Rid of the Senate Filibuster Is a Bad Idea

Conservatives should also cherish the legislative filibuster for the check it places on the ability of the government to foment massive change with little reflection. As Russell Kirk counseled, it is the principle of prudence that, among other things, separates conservatives from progressives.

While progressives dash after their desired outcomes with little thought to the consequences, Kirk cautions conservatives to reflect, to ensure that the risk of new abuses is not worse than the evils it is trying to solve.

In many ways, the filibuster forces that type of contemplation upon the Senate.

To put the value of the filibuster in more concrete terms, simply consider all the policies conservatives would now be living with if they hadn’t been stopped by the legislative filibuster.

Removing the legislative filibuster would represent a monumental shift in how the Congress operates—particularly in how quickly the government’s whims could be enforced on the public, without the deliberation the framers sought to ensure.

The Senate would do well to respect its rules—the consequence of deliberation and process—rather than upend them for a temporary advantage.