The Citadel Will Require All Cadets to Study Constitution 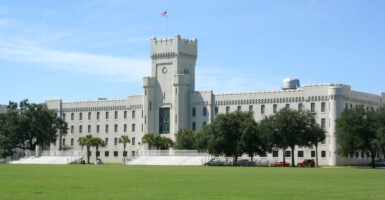 Cadets at The Citadel will be required to complete a three-credit-hour class on the Constitution and other founding documents. This brings the South Carolina senior military college in compliance with state law. (Photo: Sailaway46/Getty Images)

The Citadel, the public military college in Charleston, South Carolina, has announced it will require all cadets to complete a class on the U.S. Constitution and other founding documents beginning in the 2020-21 academic year.

The Citadel is one of six senior military colleges in the United States. Founded in 1842, its mission is to instill cadets with “the moral courage to do the right thing” so that they “become principled leaders in all walks of life.”

The Citadel’s president, retired Marine Gen. Glenn Walters, announced the new requirement July 1 in response to alumni and state legislators who asked the school to comply with a state law mandating the class. The decision by Walters to establish this requirement brings the college into compliance with state law.

For 96 years, South Carolina law has mandated public colleges to require students to take a yearlong class on the Constitution, the Declaration of Independence, and the Federalist Papers. (A separate state law applies to high schools.)

The Citadel’s decision to comply with the law is in stark contrast to most other colleges in South Carolina that have flouted and balked at the law.

For example, the University of South Carolina—the state’s largest public college—called the law “archaic” and refused to comply with it. The university said a required class on the Constitution is too financially burdensome—yet somehow manages to finance classes on the history of the devil and Tailgating 101.

Instead of complying with the law’s mandate of a yearlong class, the University of South Carolina said it hands out pocket Constitutions on Constitution Day. The university has not said whether a student can pass Tailgating 101 by being handed a hot dog at a football game.

Similarly, Clemson University—the state’s second-largest public college—pretends to comply with the law by requiring students to watch a one-hour video about the Constitution as a single module within its freshman diversity class. Clemson claims the video is a sufficient equivalent to the law’s mandate of a yearlong class.

Concerned about the “optics” of breaking state law, Clemson has sent taxpayer-funded lobbyists to the state Legislature to “kill” the requirement to teach the Constitution.

>>> Related: Clemson U Works With Liberal Lawmakers to ‘Kill’ Requirement to Teach Constitution

In contrast to the University of South Carolina’s handing out pocket Constitutions and Clemson’s video, The Citadel’s required class is three credit hours in length—a full semester class.

The Citadel Faculty Senate unanimously voted March 6 to approve the new required class to comply with the law. Upon voting, Citadel professor Sarah Tenney remarked: “Spend five minutes on Facebook and it is obvious there is a need for this course.”

This new mandatory class, “Leadership in American Government and Society,” teaches cadets about the Constitution, the Declaration of Independence, the Emancipation Proclamation, and the Federalist Papers. Walters said it will link these documents with the “study of American institutions and history, to include African American history.”

When Walters announced the launch of the required class, he said it is important that cadets study the Constitution, a document he “spent a lifetime” defending.

Walters served 39 years in the Marine Corps. He was trained as a helicopter pilot, is a veteran of the Afghanistan War, and retired as a four-star general and assistant commandant, the Marines’ second-highest ranking officer.

Like Walters, the legislators who wrote the law requiring the Constitution course must have also valued the Constitution. This is evident by the law’s provision that provides for the “removal” of the president if the university does not comply. Perhaps legislators included this removal provision out of fear that one day colleges in South Carolina would ignore the law, as most now do.

By making the decision to require a class on the Constitution, The Citadel joins the three other South Carolina colleges that comply with state law: Coastal Carolina University, Francis Marion University, and Lander University.

Now, approximately 19,000 South Carolina undergraduate students will complete a class on America’s founding documents by the time they graduate in 2024. Thousands more students in South Carolina deserve this college-level instruction owed to them by law.

State Sen. Larry Grooms, a member of the Senate Education Committee and the leader of the statewide effort to force public colleges to comply with the law, commended The Citadel’s decision.

“I am proud of The Citadel’s decision to uphold the law. This is the right call and I sincerely hope [the University of South Carolina] and Clemson take note,” Grooms said. He added:

These and other founding principles have held us together and continue to unite us as Americans. As we strive to become a more perfect union, today’s students must understand and learn from our founding documents. For one day, it will be up to them to protect our national fabric from becoming tattered and torn. It is the Declaration of Independence, after all, that explains the purpose of government is to protect the God-given rights of equally created people from those who would trample upon them.

Known for its leadership, The Citadel sets the example for other colleges in South Carolina.

Clemson and the University of South Carolina should stop violating state law and instead follow The Citadel’s example of teaching students the Constitution so that they, too, can train students to “become principled leaders in all walks of life.”