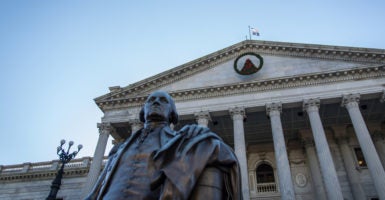 The South Carolina Senate approved a bill that would require all students at state colleges to take a three-credit-hour class on America's founding documents. (Photo: HunterBliss/Getty Images)

Should college students be required to study America’s founding ideals and the founding documents from which they emanate?

Many people in South Carolina believe they should.

Last month, the South Carolina Senate passed the Reinforcing College Education on America’s Constitutional Heritage Act (REACH Act), which requires all college students at state colleges to take a three-credit-hour class on the Constitution, the Declaration of Independence, and the Federalist Papers.

In fact, the REACH Act passed by the South Carolina Senate is not a new law, but merely updates existing law.

For 95 years, South Carolina law has required public colleges to teach students the founding documents of the United States for “one year.”

But in 2014, University of South Carolina President Harris Pastides called this law “archaic” and refused to comply with it.

He said the law was inconvenient to follow, in need of “modernization,” and that the University of South Carolina teaches the founding documents in ways that “best benefit modern undergraduate … exposure and understanding” by passing out pocket Constitutions on Constitution Day.

Under this logic, the university must also think it could teach chemistry by handing out copies of the periodic table on World Science Day.

As The Daily Signal previously reported, the college president’s argument for why he won’t comply with the state law hinges on a portion of the statute that requires that before a student can graduate, the “power of his loyalty” to the Constitution must be examined.

Pastides claims that’s “problematic” and would generate “lawsuits in the federal judicial system.” So, because he views one small non-essential portion of the law as unconstitutional, he has elected to ignore the other requirement that mandates classes on the Constitution, Declaration of Independence, and the Federalist Papers.

This resistance by Pastides to teaching the Constitution—as required by existing law—is what prompted the South Carolina Senate last month to act to “update” the law by passing the REACH Act.

South Carolina Senate Majority Leader Shane Massey said he was more than annoyed that the “universities don’t think they have to follow the law.”

The REACH Act updates the existing law by removing the law’s loyalty provision and by revising the length of required instruction from “one year” to three credit hours.

The South Carolina Senate debated this legislation for more than three hours, with opposition from several Senate Democrats. Ultimately, by a vote of 29-7, the Senate passed the REACH Act and sent it to the state House of Representatives.

In 1776, 56 Americans signed the Declaration of Independence, recognizing God-given unalienable rights and pledged their lives, fortunes, and sacred honor in support of that.

These were not just words for these men, but a commitment. Three of the four signers from South Carolina paid a price when they were captured by the British during the War for Independence.

The United States is an exceptional country because of its founding principles. Knowledge of those principles is not something with which we are born. It must be learned.

Therefore, it’s critical that students are equipped with a firm understanding of the documents where these principles are enshrined—the Constitution, the Declaration of Independence, and the Federalist Papers.