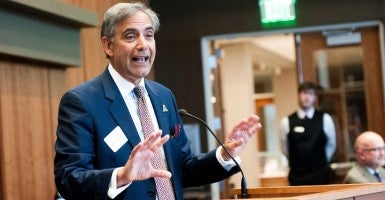 University of South Carolina president Harris Pastides is refusing to comply with a state law that requires all public universities to teach students about America’s founding documents, including the Constitution, calling it “archaic.”  In a bit of irony that is apparently lost on Pastides, USC claims the state law is itself unconstitutional.

Section 59-29-120 of the South Carolina Code requires students be taught the “essentials of the United States Constitution, the Declaration of Independence, and the Federalist Papers,” and goes on to provide that “no student in any such school, college, or university may receive a certificate of graduation without previously passing a satisfactory examination upon the provisions and principles” of those documents.  A number of South Carolina universities do not require students to take such courses or pass such an exam—most notably the state’s flagship institution: the University of South Carolina.

When asked about this by a student at an academic forum in 2013, the vice provost of USC, Dr. Helen Doerpinghaus, claimed that while the university did not follow the letter of the law, it did follow the “spirit of the law” by handing out pocket-sized Constitutions on Constitution Day. Under this logic, the university must believe it could teach students chemistry by handing out a copy of the Periodic Table on World Science Day on Nov. 10.

Starting in December 2013, several concerned state legislators wrote to the university asking about this failure. President Pastides  responded by saying the law was “archaic” and giving multiple reasons for the university’s noncompliance.  He also claimed that about 60 percent of students take a political science or history class that discusses these documents, which, of course, means that approximately 40 percent of students don’t take those classes and do not receive a proper grounding in our founding documents and the principles that animate them.

The university’s argument hinges on a portion of the statute that requires that before a student can graduate, the “power of his loyalty” to the Constitution must be examined. Pastides claims this is “problematic” and would generate “lawsuits in the federal judicial system.” So because the university views one small portion of the law as unconstitutional, it has elected to ignore the other requirement that mandates classes on the Constitution.

If the university believes a loyalty provision is constitutionally suspect, as it no doubt is, all it has to do is require classes on the Constitution but not examine a student’s “loyalty.” In standard legal practice, if a court believes part of a law is unconstitutional, it will sever the problematic portion if the remaining parts of the law remain operable. Here, the president of the University of South Carolina has consciously chosen not to follow state law because of one debatable provision that is not essential to the main point of the law – teaching students about the Constitution, the Declaration of Independence and the founding documents essential to our Republic.

Recently, the South Carolina legislature appropriated funds for two South Carolina colleges (USC Upstate and the College of Charleston, both of which required students to read material containing homosexual themes) but dictated that at least some of those funds had to be used to teach America’s founding documents and that students who have religious or moral objections to reading gay-themed material must be offered the opportunity to read other material instead.  Even if these two universities comply with these conditions, they and the other universities in the Palmetto State still would not be in compliance with the law: offering classes on our founding documents and requiring all students to take those classes are two different things.

Apparently complying with state law requiring study of and testing proficiency regarding our founding documents is just too “archaic” a concept that might interfere with students taking courses such as “Lady Gaga and the Sociology of the Fame,” which is a class offered by the Sociology department at USC.

Before leaving the presidency in 1989, Ronald Reagan spoke of a “resurgence” in national pride and patriotism that took place during the 1980s. But Reagan warned:

“[T]his national feeling is good, but it won’t count for much, and it won’t last unless it’s grounded in thoughtfulness and knowledge… Our spirit is back, but we haven’t reinstitutionalized it… Let’s start with some basics: more attention to American history and a greater emphasis on civic ritual.”

This is South Carolina’s chance to reinstitutionalize what has been lost. South Carolinians already have what they need to do this—the law—they just need to pressure their universities to obey it.