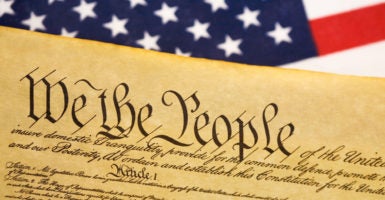 Clemson University doesn't comply with current law on teaching the Constitution and opposes a bill in the South Carolina General Assembly to update it, according to emails between the university’s provost and two lobbyists for the school. (Photo: LPETTET/Getty Images)

Clemson University officials, concerned about the “optics” of ignoring a South Carolina law requiring public colleges to teach the U.S. Constitution, have lobbied the state Legislature to repeal the requirement.

Clemson both refuses to comply with the existing law and opposes a bill in the South Carolina General Assembly to update it, according to emails between the university’s provost and two lobbyists for the school.

In an email to Clemson’s lobbyists at the General Assembly sent April 2, 2019, Provost Robert Jones instructed them to “kill” the legislation updating the law.

This email and others were obtained through a request for public documents under South Carolina’s Freedom of Information Act.

For 96 years, South Carolina law has required public colleges to mandate that students take a yearlong class on the Constitution, the Declaration of Independence, and the Federalist Papers.

But most colleges in South Carolina, including Clemson, violate the law by not requiring students to take a class on America’s founding documents, according to the state’s Commission on Higher Education. (A separate state law applies to high schools.)

Instead of complying with the law’s requirement of a yearlong class, Clemson pretends to comply by having students watch a short online video about the Constitution as part of its freshman course CU 1000.

Under this dubious logic, Clemson, the second-largest university in South Carolina, could claim to teach chemistry by having students watch an online episode of “Bill Nye the Science Guy.”

Angie Leidinger, a taxpayer-funded lobbyist for Clemson, makes a salary of $285,221 in part to fight against the bill to update the law actively violated by Clemson.

Intended to make it easier for colleges to follow the law, the bill would reduce the length of required instruction from “one year” to “three semester credit hours.”

Leidinger used the phrases “happy to discuss” and “happy to share” in a Jan. 29, 2019 email to Democrat lawmakers asking them to repeal the requirement that colleges teach the Constitution.

The lobbyist wrote that Clemson supports efforts to “repeal in its entirety that portion of the bill that relates to higher education and have the burden [of a legal mandate to teach the Constitution] solely upon K-12.”

State Sen. Brad Hutto, a Democrat who sits on the Education Committee, “is not interested in trying to make [the] bill tolerable so is not interested in further amendments,” Deanne Gray, director of minority research for the state Senate, wrote back to Leidinger. “He wants the bill killed.”

Leidinger responded: “Thank you for your help on this!”

The South Carolina Senate overcame Democrats’ three-hour filibuster, led by Hutto, and passed the bill Feb. 13, 2019 by a vote of 29-7.

The state Senate sent the measure to the state House of Representatives, where it became bogged down in the higher education subcommittee with the help of Clemson lobbyists.

Once the bill was in the House, Clemson lobbyist Mark Cothran, whose salary is $149,264, emailed Clemson’s associate provost, Jeremy King, on March 19, 2019.

Cothran had talked with House members who were concerned about the school’s three-credit hour graduation requirement called “cross-cultural awareness,” which isn’t mandated by South Carolina law.

Current law on teaching the founding documents imposes penalties for noncompliance, including removal of the university president.

Clemson places the additional cross-cultural awareness graduation requirement on students while not complying with the existing law.

King replied to Cothran by email, also on March 19, 2019: “I can already envision the optics regarding this.”

In the email, King did not address Clemson’s violation of the law, only his concern for “optics.”

In giving reasons for the cross-cultural awareness requirement, the associate provost cited “the need to give our students global perspectives.”

A subcommittee of the House Education and Public Works Committee chaired by state Rep. Bill Taylor, a Republican, took up the issue last month during a Feb. 4 meeting.

State Rep. Kirkman Finlay III, a Republican, testified about how state colleges were choosing to break the law on teaching the founding documents.

“There is one point we are missing that we need to review,” Finlay said, adding:

That is the fundamental issue I see first and foremost. Understand that this debate has been going on since 2014. No one believes that every university in the state could not be complying with this law six years later. It is a decision that has been made not to.

Jones, Clemson’s provost, emailed instructions to lobbyists Leidinger and Cothran to “kill” the bill after the state Senate’s legislation moved to the House.

Leidinger told the provost not to worry, informing him that she and Cothran “will be doing some due diligence with committee staff.”

Since then, the bill has languished in the Education and Public Works Committee.

At the Feb. 4 subcommittee meeting on the legislation, Taylor said that “we’ll keep on this until we get it right … we’re here to get the truth.”

Taylor’s comments were encouraging, but after a year the committee has yet to send the bill to the House floor for a vote.

The House should pass the bill soon and send it to Gov. Henry McMaster, a Republican, for his signature.

It is unlikely that Clemson’s network of upper-level officials suddenly will change their decision to lobby against teaching America’s founding documents to their students. It’s possible, however, that they may refrain from doing so on their publicly available email accounts.

What follows is a rebuttal from Joe Galbraith, associate vice president for strategic communications at Clemson University, which The Daily Signal has added with the consent of the author.

Thanks to The Daily Signal for reaching out and providing Clemson an opportunity to respond to this article. You reference Jameson Broggi’s article as “commentary,” and we understand the difference between news reporting and commentary.

Still, Mr. Broggi’s attempt to give his commentary the veneer of journalistic reporting proves the need for additional context, which we are happy to provide. Had Mr. Broggi reached out before he completed his piece, he would have learned the following facts:

1. Clemson’s position in support of the idea that all students should have foundational knowledge of the founding documents has not wavered. Any assertion that Clemson is flouting the law in this case is simply not supported by the facts. In fact, Clemson is one of the few higher education institutions in South Carolina working diligently to comply with the current outdated statute.

2. Clemson University requires all new students (freshman and transfers) to complete—during their first year of enrollment at Clemson University—CU 1000, which includes a section on “Our Nation’s Founding Documents.”  During this course, students learn about the principles that undergird our nation’s founding documents—the Declaration of Independence, Federalist Papers, Constitution, and Emancipation Proclamation.

Required learning activities for this module, which is offered in both the fall and spring semesters, include primary and secondary text reading assignments, watching a video on historical forces that shaped our nation’s founding documents, and completing the module quiz.

3. Clemson University acknowledges the need to bring clarity to, and update portions of, the current statute. We have worked, and continue to work, with state legislators to provide clarifying language to ensure the proposed legislation is effective and efficient for all South Carolina students.

4. We asked the Legislature not to create two mandatory, three-credit hour courses because this would add (conservatively) approximately $1.3 million of additional annual costs to the university. Our request to exempt students from the courses if they already received the same training in high school is meant to cut wasteful spending and relieve our students from excessive regulations that add no value to their educational experience.

This is demonstrated in the truncated email exchange referenced in the article provided, in which Mr. Broggi clearly just quoted the snippet that appears to reinforce his preconceived hypothesis. The full text of the “repeal in its entirety” exchange with a legislative staffer, is below. The “or” is important:

1. Repeal in its entirety that portion of the bill that relates to higher education and have the burden solely upon K-12  OR

2. Adopt language that accomplishes the following:

—If a current student is in a major that will ensure this is taught (i.e. political science, history) then the requirement would be satisfied

—If none of the above, then institutions would have to report to CHE how they will satisfy this requirement as a part of a minimum 1 hour course (this is the current Clemson practice)

The fact is that educating students on these vital documents should be a shared responsibility among educators at both the secondary and post-secondary levels. As Clemson works to do its part, it’s important that others do the same, so that students learn this material without being subjected to additional repetitive coursework that extends their path to graduation.

Thank you again for reaching out for our perspective on this issue.