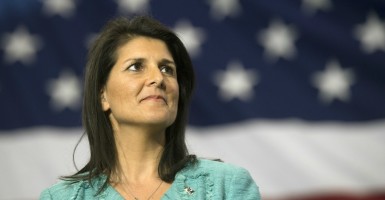 The South Carolina Founding Principles Act requires the study of the United States Constitution, the Federalist Papers, and “the structure of the government and the role of separation of powers and the freedoms guaranteed by the Bill of Rights” to be added into statewide social studies programs.

This bill, signed June 1, reinforces South Carolina’s Section 59-29-120 that required all public education students, both in high school and in college, to pass a test after a year-long class on the founding documents and principles.

The Founding Principles Act bolsters the existing law by adding an accountability clause requiring the State Department of Education to report to the House and Senate Education Committees as well as the Public Works Committee every two years. This report will outline how South Carolina educators are teaching the documents in their classrooms.

State Rep. Chip Huggins, R-Lexington, told The Daily Signal, “I was just so worried about the erosion away from our foundation, and when I say that, I think it’s time we get back to the basics. The basics in which this country was founded. That’s exactly what we wanted to accomplish with this bill.”

Furthermore, teachers will be provided with “professional development opportunities” to ensure the subject is being properly taught.

“We now have the assurance that the founding principles will be taught.” @ChipHugginsSC

“A major part of forming future citizens capable of self-government is ensuring that they are properly educated in the founding documents of our nation,” Arthur Milikh, associate director for principles and politics at The Heritage Foundation, told The Daily Signal in an email. “This was once common sense throughout America, but now we are forced to fight to ensure that even the most basic texts—the Constitution, the Federalist Papers, the Declaration of Independence—are taught.”

“These works tell us about the nature of our country, the principles for which we stand, and the way to preserve our constitutional order. Should these texts be lost to students, the next generation will be ruled entirely by popular culture and public opinion,” Milikh wrote.

Huggins, the main sponsor of the bill, said the legislation “ensures that when the standards are rewritten, the founding principles will still be included.”

The Founding Principles Act, however, does not force South Carolina public colleges to do the same.

Section 59-29-120 states that “no student in any such school, college, or university may receive a certificate of graduation without previously passing a satisfactory examination upon the provisions and principles,” but does not hold either public high schools or colleges to that standard. The accountability aspect of The Founding Principles Act only applies to South Carolina public high schools.