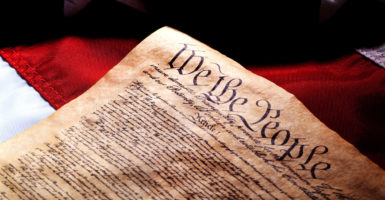 A bill would require students to take a three-credit, semester-long class covering America’s founding documents, including the Constitution, the Declaration of Independence, and the Federalist Papers. (Photo: DanielBendj/Getty Images)

South Carolina Democrats argued for more than an hour to prevent legislation that would require state universities to teach a “Constitution 101” course Tuesday.

The Republican-proposed bill would update an existing 1924 requirement to teach the course, which the University of South Carolina has hitherto ignored. The legislation has already passed in the Senate, but Democrats in a Tuesday House subcommittee hearing argued the update would be too burdensome on students both financially and academically.

The bill would require students to take a three-credit, semester-long class covering America’s founding documents, including the Constitution, the Declaration of Independence, and the Federalist Papers.

Democratic South Carolina state Reps. Ivory Thigpen and Wendy Brawley argued the cost of the course, which Thigpen referred to as “Constitution 101,” may be transferred onto students. They also pointed to a representative from the university who argued against the bill’s requirement that students pass a comprehensive exam covering the course material to graduate.

Republican South Carolina state Rep. Garry Smith, R-27th District, who is sponsoring the bill in the House, pointed to several classes not required by law that the university could stop offering if it wanted to cut costs, such as a class on “Global Citizenship.”

“I would argue that if you can’t pass a comprehensive exam on the Constitution and the Bill of Rights, then maybe you shouldn’t graduate,” Smith said.

The bill is the latest attempt from South Carolina Republicans to get the university to require a class that is already mandated by law. The first push came in 2014, which University of South Carolina President Harris Pastides rebuffed with a letter listing several reasons the university would offer, but not require, the class. The primary reason was a mandate to test students for “loyalty to the United States.”

“It appears that an update of these statutes is necessary to strike the balance between compliance and application,” Pastides wrote at the time. “The University of South Carolina is committed to working with members of the General Assembly on a favorable solution.”

The updated legislation appears to address each of Pastides’ concerns, putting the university in a difficult situation should it again insist on not requiring the class.