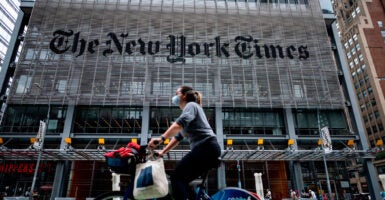 In a lengthy resignation letter to The New York Times’ publisher, editor and writer Bari Weiss says she was bullied and run out of her job because of her personal views. Pictured: the newspaper's headquarters as seen June 30. (Photo: Johannes Eisele/AFP/Getty Images)

Now, Weiss has resigned. In a lengthy letter Tuesday to the Times’ publisher, posted on her personal website, she says she was bullied and run out of her job because of her personal views.

Weiss is a self-described centrist—hardly a conservative or Trump supporter—but she has drawn the ire of the hard left and seemingly a vocal portion of the Times’ readership and staff over her breaks from progressive orthodoxy.

In her resignation letter Tuesday to Publisher A.G. Sulzberger, Weiss writes that since hiring her, the Times has become more ruthlessly ideological.

“[A] new consensus has emerged in the press, but perhaps especially at this paper: that truth isn’t a process of collective discovery, but an orthodoxy already known to an enlightened few whose job is to inform everyone else,” Weiss writes in the letter dated July 14.

As the ethics and mores of that platform have become those of the paper, the paper itself has increasingly become a kind of performance space. Stories are chosen and told in a way to satisfy the narrowest of audiences, rather than to allow a curious public to read about the world and then draw their own conclusions. I was always taught that journalists were charged with writing the first rough draft of history. Now, history itself is one more ephemeral thing molded to fit the needs of a predetermined narrative.

It’s clear that was the case after a controversy at the Times just a few weeks ago, when staffers publicly revolted after the newspaper printed an op-ed by Sen. Tom Cotton, R-Ark.

Cotton defended the potential use of the National Guard to quell riots, a position held by just over half of Americans, according to polls.

The Times backed down to the mob and attached a ridiculous, 317-word editor’s note atop Cotton’s June 3 op-ed, explaining how the published piece didn’t meet its standards.

Two editors were forced to resign over the decision to publish the op-ed by Cotton, a former Army Ranger who served in both Iraq and Afghanistan.

It’s clear that the real standard that was violated was the judgment of angry, left-wing opinionators.

In her resignation letter, Weiss writes:

The paper of record is, more and more, the record of those living in a distant galaxy, one whose concerns are profoundly removed from the lives of most people. This is a galaxy in which, to choose just a few recent examples, the Soviet space program is lauded for its ‘diversity’; the doxxing of teenagers in the name of justice is condoned; and the worst caste systems in human history include the United States alongside Nazi Germany.

On top of that, Weiss writes, the Times became a hostile work environment.

She says she had become a target of hate from co-workers behind the scenes and that “other New York Times employees publicly smear me as a liar and a bigot on Twitter with no fear that harassing me will be met with appropriate action. They never are.”

Weiss then offers a warning, and advice for young people who want a career in journalism:

Rule One: Speak your mind at your own peril. Rule Two: Never risk commissioning a story that goes against the narrative. Rule Three: Never believe an editor or publisher who urges you to go against the grain. Eventually, the publisher will cave to the mob, the editor will get fired or reassigned, and you’ll be hung out to dry.

Weiss’ resignation letter highlights the problems consuming not just The New York Times—which has slid deep into the camp of promoting activism over journalism in the past few years—but the media landscape as a whole.

The Times, for anyone paying attention, has been biased for generations. It’s a newspaper of record, as Weiss notes, and an incredibly powerful one. It also has been quite liberal and certainly has showed its bias in the past.

The dispatches of Walter Duranty, who lied about the Soviet-created Ukrainian famine that killed millions in the 1930s, is perhaps one of the worst “fake news” scandals in modern history.

Nevertheless, The New York Times has had its share of high-quality journalism and accurate reporting, and has attempted to inject at least some ideas in its opinion section that aren’t left wing.

We are now entering a new era. The mask of objectivity is slipping off.

It’s clear that those running America’s premier journalistic institutions are dropping  any pretense of searching for the truth in favor of declaring they know the “truth.”

Just look at The New York Times’ deeply flawed and highly criticized 1619 Project, which, despite noted and half-heartedly acknowledged inaccuracies, won the Pulitzer Prize and is now being force-fed to students in schools around the country.

The slide of the Times mirrors the abandonment of the culture of free speech, debate, and inquiry in Western society. In its place is the elevation of “lived experience,” militant political correctness, and cancel culture—ideas once confined to academia that the left has poured into the mainstream.

Conservatives and centrist or right-leaning Americans are canceled and siloed off from the mainstream; liberals who deviate even moderately from left-wing consensus are subjected to “struggle sessions.”

Weiss’ entire letter is well worth a read, if only because it demonstrates where our cultural revolution is going. And how the left increasingly tolerates no dissent whatsoever.