Once Again, the Left Rewrites History 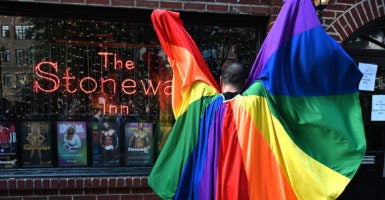 A man wears a rainbow cape as people gather for the 50th anniversary of the Stonewall Riots in front of the Stonewall Inn in New York, June 28, 2019. The June 1969 riots that were sparked by repeated police raids on the Stonewall Inn—a well-known gay bar in New York's Greenwich Village—proved to be a turning point in the LGBTQ community's struggle for civil rights. (Photo: Timothy A. Clary/AFP/Getty Images)

As Pride month drew to a close, The New York Times was busy informing readers that after decades of progress, the gay rights movement was still not as inclusive as it needs to be.

“Transgender women of color led the uprising at the Stonewall Inn 51 years ago on Sunday, but they were never put at the center of the movement they helped start: One whose very shorthand, ‘the gay rights movement,’ erases them,” began a recent Times report.

The problem is that it’s hard to erase what wasn’t there to begin with.

Whatever contributions “transgender women of color” have made to the gay rights movement, they did not lead the riots at the Stonewall Inn that touched off that movement—the Times’ story was factually incorrect.

The Times later stealth-edited the paragraph, but it’s just one of three Times stories in the last six months perpetuating this false narrative about “trans women of color” and Stonewall. (See here and here.)

The leaders and participants in the Stonewall riots, which involved hundreds in the streets clashing with the New York Police Department’s public morals squad, were overwhelmingly white men.

But in woke America’s rapidly evolving hierarchy of who gets to claim they’re oppressed, being gay isn’t enough for today’s activists and their media allies. So they’re perpetuating myths about the involvement of “trans women of color” at Stonewall to give the historic gay rights battle “intersectional” bona fides.

The claims made about trans people leading the Stonewall riots centers almost exclusively on two people, Marsha P. Johnson and Sylvia Rivera, both of whom were part of the gay scene in Greenwich Village in the late 1960s.

Rivera claims to have participated in the riot, but that claim is undercut by witnesses who say they saw Rivera sleeping on a bench when the revolt began after taking heroin. Johnson personally told a historian that he didn’t arrive until after the riot started.

Despite this, a persistent myth has emerged that not only did the pair lead the Stonewall uprising, but that Johnson even threw the brick that started it. As recently as last year, the Times seemed clear about the facts: “The impact of Ms. Rivera and Ms. Johnson on the trans and gay movements can’t be overstated, but it doesn’t take much digging to learn that they didn’t start the Stonewall rebellion.”

Here’s where it gets even more controversial—were Johnson and Rivera even transgender? David Carter’s history of the event, “Stonewall,” describes Johnson as a drag queen. You can watch Johnson in his own words describing himself as a “boy in drag.” Drag certainly subverts gender conventions, but it is a distinct and storied tradition within the gay community, and being gay and wearing women’s clothes hardly makes you transgender.

At one point Rivera decided to take female hormones, but quickly stopped. In his definitive book on the event, Martin Duberman quotes Rivera as saying, “I came to the conclusion that I don’t want to be a woman. I just want to be me. I want to be Sylvia Rivera.’”

Both Johnson and Rivera could be described as gender fluid and supportive of transgenderism, but transgender activists themselves are quite militant about being “misgendered.” By that standard, calling Johnson or Rivera “transgender” doesn’t quite comport with the identities they created for themselves.

Nonetheless, scores of media outlets including The Washington Post, The Wall Street Journal, USA Today, and PBS have been pushing a dubious transgender narrative about Stonewall. Politicians such as Kamala Harris and Joe Biden have also gotten into the act.

Even the gay establishment, which ought to know better, is complicit in rewriting history. Pete Buttigieg, America’s first openly gay major party presidential candidate, incorrectly tweeted “#Pride celebrates a movement that traces back to the courage of trans women of color 50 years ago this weekend.”

An article currently on the Human Rights Campaign website incorrectly asserts that the majority of rioters at Stonewall fit Buttigieg’s description: “Stonewall’s LGBTQ patrons—most of whom were trans women of color—decided to take a stand and fight back against the brutal intimidation they regularly faced at the hands of police.”

Some notable gay writers are pushing back. Last month, gay marriage champion Andrew Sullivan called out the Times for falsely transgendering Stonewall, asking “Does the NYT have fact-checkers? Or is the ‘narrative’ more important than reality?”

“As America has essentially come to accept gay equality, the intersectional left—perpetually in need of an adversarial posture against society, and for whom ‘trans women of color’ is now a slogan—has settled on radical gender ideology as its next front in the culture war,” he wrote.

“Stonewall loses its cachet as an inspiration for contemporary ‘resistance’ if it retains its actual gay character, as that renders it achingly bourgeois, and so the event has been distorted into a transgender story, thereby making it more subversive.”

To be clear, many in the LGBT community either remember Johnson and Rivera fondly or were inspired by them, and they are lauded for their activism in the years following Stonewall.

But at this point it’s impossible to say whether they would enjoy their current posthumous fame absent the media regurgitating false claims about their participation in Stonewall and unfounded speculation about their sexual identity.

Johnson and Rivera’s legend has now grown to the point that New York City Mayor Bill de Blasio announced last year the city would build a statue of the pair near the Stonewall Inn. The announcement was accompanied by a statement from de Blasio’s wife, Chirlane McCray, touting their “leading role at Stonewall.”

If Johnson and Rivera are to have a statue, contextualizing it in relation to Stonewall is clearly wrong, and the rush to turn the pair into trans rights icons seems to be doing the exact opposite of what The New York Times suggested—it’s erasing a pivotal event for gay men by making the dominant narrative transgenderism.

Much has been said lately about the problems of wantonly tearing down statues to erase history, but the ideology behind erecting statues to invented historical narratives might be even more alarming.