The Enduring Example of the Tiananmen Square Massacre 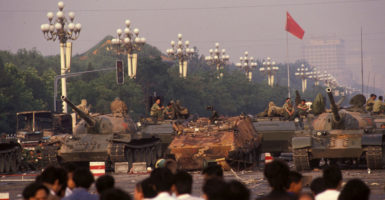 I will be privileged this Wednesday evening to participate in a candlelight vigil marking the 31st anniversary of the Tiananmen Square massacre. We will gather at the Victims of Communism Memorial in Washington, D.C., to honor the hundreds and probably thousands of pro-democracy Chinese students who were killed by communist troops and tanks in June 1989.

We will gather to refute the lies that the leaders of Communist China continue to tell about the massacre.

They deny that it happened. They say that troops were called in to put down some “hooligans” who threatened law and order. They claim that the few injuries that occurred were suffered by the troops. They dismiss as “Western lies” any and all stories about an alleged “massacre.” To this day they will not permit any public discussion of Tiananmen Square and block any mention of it on Chinese social media.

Is it surprising, then, that the Chinese Communists persist in lying about their essential role in the global spread of the novel coronavirus?

As we consider what actions to take regarding Communist China—ranging from economic sanctions to restricting the tens of thousands of Chinese “students” who attend our colleges and universities—we must keep in mind what kind of government we are dealing with. It is a totalitarian regime that knows only one rule, articulated by its still-revered leader, Mao Zedong, “Political power grows out of the barrel of a gun.”

At the center of the Victims of Communism Memorial plaza is a bronze replica of the Goddess of Democracy that dominated Tiananmen Square until it was destroyed by communist tanks early in the morning of June 4.

The Victims of Communism Memorial Foundation debated what icon to feature in its memorial. A part of the Berlin Wall? A replica of the killing fields of Cambodia? A tiny boat like the one used by Cubans to flee Fidel Castro?

In the end, the foundation selected a replica of the Goddess of Democracy for two reasons: 1) It is a reminder of the bloody lengths to which a communist regime will go to retain its tyrannical power; and 2) It is an inspiring example of what free men and women will do to resist tyranny and pursue freedom.

I invite you to join us (virtually, of course) at our candlelight ceremony this Wednesday evening to pay tribute to the courageous Chinese students who challenged the Chinese Communists and set an enduring example for all captive peoples and nations.

Light a candle with us as we vow that we will never forget the ultimate sacrifice that the students of Tiananmen Square made for freedom and democracy.