Columbia Shut Down Student Group Known to Be Beijing Front Group. What Does That Mean? 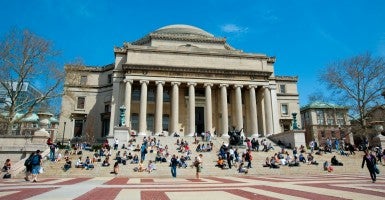 We celebrated Monday that Columbia University had shut down a Chinese student society reputed to front for Beijing, seeing in it a ray of hope that colleges may at last start fighting back against illiberalism. Turns out our celebration may have been premature and the group is now back on a probationary basis.

Columbia is not releasing much information, which makes it hard to read the proverbial tea leaves.

As we reported earlier, if you click on the website of the Columbia Chinese Students and Scholars Association, you get a sign in English and Chinese which says, “Unfortunately, this student organization has been de-recognized, which means the organization is currently not programming or engaging in any activities.” No explanation is offered as to why the organization was shut down.

And Columbia until yesterday morning was not offering much more. A phone query was answered with this email from the Associate Vice President, Media Relations: “Thanks for your inquiry. Here is our official statement:

The number of students from China enrolled at Columbia exceeds any other group of international students by a substantial margin, a fact we celebrate and take pride in. In this matter, the Columbia University Chinese Students and Scholars Association (CUCSSA) has been treated in the same manner as other student groups. Unfortunately, the ongoing violations of multiple financial and student organizational policies by CUCSSA persisted after the organization had been placed on probation, making the recent disciplinary action unavoidable. The University recognizes the valuable function served by student groups such as CUCSSA and will consider future re-recognition of this group in accordance with University policy.

The email went on to say “We have no additional comment or information to share” and even though the statement was perplexing, it added “Thanks for understanding.”

Things got even more perplexing Tuesday when this email from the same associate VP landed in people’s inboxes:

“Hello. We wanted to share news about the next steps with the Columbia University Chinese Students and Scholars Association (CUCSSA), in the following University statement:

‘We are pleased that the leadership transition team of the Columbia University Chinese Students and Scholars Association (CUCSSA) and the University’s Interschool Governing Board have agreed on a plan permitting CUCSSA to regain its official recognition, on a probationary basis.  The CUCSSA transition team’s commitment to abiding by the policies and procedures that govern all Columbia student organizations will strengthen CUCSSA and allow it to continue offering services and support that are so valuable to Columbia’s large and growing number of students from China. Professor Lening Liu, Director of Chinese Language Program at Columbia, has been appointed faculty advisor to CUCSSA and will work closely with the Association as it continues to serve as a resource for our Chinese students and our University community.’

“We hope that is helpful.”

Chinese student and scholar associations throughout the country have been used as bases of espionage by the Chinese Communist Party or to intimidate those who criticize the People’s Republic of China.

One is still thus left to sift through the tea leaves to ponder what these “ongoing violations of multiple financial and student organizational policies” were, and how the “plan” remedies anything. The organization’s LinkedIn page says that since it was founded in 1996 the group has “been devoting itself to the mission of enhancing the political and cultural exchanges between China and the U.S., projecting positive Chinese influences into the American society.”

Moreover, the group recently amended its constitution to add “the mission of facilitating the perceptions of China’s peaceful rise” and “ensure the formation of a peaceful and harmonic political environment at the place where Chinese people live.”

Several media reports have detailed how different Chinese student and scholar associations throughout the country and the world have been used as bases of espionage by the Chinese Communist Party or to intimidate those (including Chinese) who criticize the People’s Republic of China. Tibetan monks, members of the Falun Gong religion, banned in China, or pro-democracy speakers have been shouted down by group members, and the groups’ websites have been used to shame Chinese students who dared criticize the Chinese government.

The students and scholars groups are not the only vehicle through which communist China attempts to censor thinking in the United States. China has set up around 100 “Confucius Institutes” at colleges and universities and some 400 “Confucius classrooms” in K-12 schools, ostensibly to teach Chinese language and culture, but very often to quash anything that is critical of the party-led government in Beijing. The Chinese government also exercises its influence by censoring Hollywood movies, as we discussed in this paper earlier this year.

America’s college campuses already are too often the prey of political correctness, wooly theories and a militant drive to shut down pro-Western opinion. When these problems come at the behest of a foreign government, and a communist one at that, it may be time to draw the line.

This article has been substantially modified to reflect Columbia’s update.