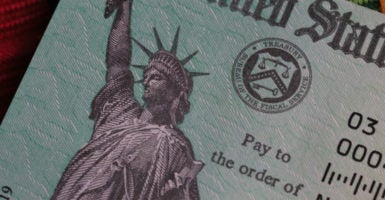 The IRS sent "stimulus" payments of $1,200 to individuals as part of the CARES Act's coronavirus relief, many of them going to dead Americans. (Photo: Douglas Sacha/Getty Images)

Dealing with the death of a loved one is already difficult enough. Every year, tens of millions of Americans experience the emotional burden of losing a parent, spouse, sibling, or close friend.

The last thing that grieving families should have to worry about is returning a check that the IRS mistakenly sent to the deceased.

Unfortunately, that tragic situation is occurring throughout the country as a result of “economic stimulus” payments included in federal COVID-19 relief legislation.

Congress can prevent the needless drama and save millions of taxpayer dollars with a small change to federal record keeping that has bipartisan support; namely, allowing the Treasury Department to take charge of the federal death database.

The issue of accidental government payments to the deceased is a long-standing problem. In some egregious cases, it involves deliberate fraud, but most of the time it’s simply a bureaucratic mistake.

Since the most common type of government payment received by the recently deceased is Social Security benefits, the Social Security Administration created the Death Master File to ensure a timely ending of payments upon death. Other federal agencies rely on that database for the same purpose, though the ability to access the database varies from agency to agency.

Even then, the Social Security Administration database is far from foolproof. Every year, it accidentally adds thousands of people who are still living. The consequences of being added to the list by mistake can be severe, and the removal process can be extremely complicated.

Thankfully, there’s a newer, more robust database already in operation. The Treasury Department has created a nearly comprehensive Do Not Pay database that federal agencies use to prevent improper payments to individuals and businesses for a variety of reasons.

That database was created as a result of a 2013 law that passed both houses of Congress unanimously, which is extremely rare for any bill with meaningful policy implications.

To prevent improper payments, federal agencies must cross-reference both of these databases at the same time, which leads to countless mistakes.

The most recent example of such mistakes involves the $1,200 checks sent by the Internal Revenue Service to individuals as part of the CARES Act, many of which are going to the dead.

The IRS has directed families to return checks sent to the deceased by accident, which is both inconvenient and a bit unsettling.

This is surely a problem everyone can agree on finding a solution for.

Part of President Donald Trump’s most recent budget proposal includes a call for giving the Treasury Department full access to the Death Master File as a way to improve the Do Not Pay database, since the Treasury is not one of the agencies with full access.

The Office of Management and Budget thinks that this reform would save millions of dollars for taxpayers by reducing improper payments.

The most straightforward and efficient way to accomplish this would be for legislators to fold the Death Master File completely into the Treasury Department. The bipartisan Social Security Advisory Board made that recommendation in a report last year, and reiterated it in the wake of the situation involving COVID-19 relief checks.

The potential shift would create a number of benefits.

First, it would mean that federal agencies no longer have to reference two separate databases to prevent improper payments, reducing the likelihood of mistakes.

Second, it would remove the burden of maintaining the database from the Social Security Administration, which is not supposed to do support work for other agencies.

This simple, commonsense idea would benefit the bereaved and the general public alike. Congress rarely has an opportunity to enact such a genuinely bipartisan, nonideological reform, and it should do so as soon as possible.