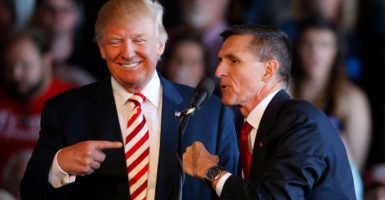 The Justice Department announced Thursday that it has dropped its controversial case against former national security adviser Michael Flynn, a little over a week after the release of embarrassing documents showing FBI bias undermined the prosecution’s case.

The documents that surfaced last week included notes of a discussion among top FBI officials about whether the goal in investigating Flynn was to “get him to lie” so that he could be  fired or prosecuted.

Flynn later pleaded guilty to lying to investigators during the Russia investigation about his conversations with the Russian ambassador to the United States before President Donald Trump took office in January.

The Justice Department’s announcement came in a court filing saying that prosecutors were dropping the case against Flynn “after a considered review of all the facts and circumstances of this case, including newly discovered and disclosed information.”

Flynn, 61, a retired Army lieutenant general who specialized in intelligence operations, had filed a motion to withdraw his guilty plea. Before the Justice Department dropped the matter entirely, U.S. District Judge Emmet Sullivan was set to rule on whether to allow Flynn to withdraw his plea.

Trump, asked about the news Thursday during an Oval Office photo opportunity with Texas Gov. Greg Abbott, lashed out at media organizations that didn’t look deeper into the FBI allegations against Flynn and the wider Russia investigation.

“You saw it today, more documents came out saying there was absolutely no collusion with Russia,” Trump told reporters.

“It was fake news, they’re all fake news,” he added.

Special counsel Robert Mueller’s Russia investigation, lasting almost two years, found no conspiracy between anyone in the Trump campaign with Russian government actors who engaged in hacking and social media ads during the 2016 presidential election campaign.

Flynn resigned Feb. 13, 2017, on his 23rd day as national security adviser, saying that he inadvertently misled Vice President Mike Pence and others about his talks with then-Russian Ambassador Sergey Kislyak before Trump took office.

Misleading Pence was not a crime, but lying to FBI agents would be. It never was clear that Flynn did lie to FBI agents, however.

Supporters say Flynn pleaded guilty because the FBI threatened to bring charges against his son under the Foreign Agents Registration Act for not registering as a foreign agent in his work with Turkey.

Trump has talked about the possibility of pardoning Flynn, but after the documents were unsealed last week, he said he likely wouldn’t need to.

The notes show they hoped to get Flynn “to admit to breaking the Logan Act,” a 1799 law that never has been used in a prosecution and was intended to prevent individuals from falsely claiming to represent the federal government when interacting with foreign officials.

Another note says of Flynn and the Justice Department, the FBI’s parent agency: “If we get him to admit to breaking the Logan Act, give facts to DOJ + have them decide.”

The notes show some indecision among Comey and his deputies, but seem to concede that prompting someone to lie could be “playing games.”

More documents released Thursday show that on Jan. 4, 2017, the FBI’s Washington Field Office recorded in a memo that it was closing the investigation of Flynn because a review “did not yield any information” to justify continuing to probe whether the incoming national security adviser was working inappropriately with the Russian government.

The FBI’s code name for the Flynn case was Crossfire Razor. Americans learned Strzok’s name in 2018 when text messages surfaced in which he disparaged Trump as a presidential candidate in 2016 while investigating Hillary Clinton’s use of a private email server to conduct official business as secretary of state.

Trump spoke passionately about media bias against him and his administration Thursday when asked in the Oval Office about the Justice Department’s decision to drop the Flynn case.

“You saw it today, more documents came out saying there was absolutely no collusion with Russia. Pulitzer Prizes should all be returned because, you know what, they were given out falsely. It was fake news, they’re all fake news.”