Trump Says He Might Bring ‘Exonerated’ Michael Flynn Back Into Administration 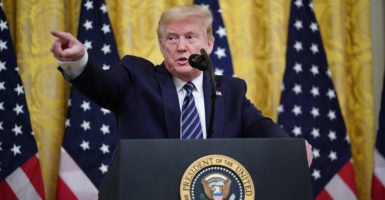 President Donald Trump said Thursday he was open to bringing his first national security adviser, Michael Flynn, back into the administration, amid new information casting a shadow of impropriety over the FBI’s case against the retired lieutenant general.

“I would certainly consider it. Yeah, I would,” Trump said at a White House press conference Thursday. He later said of Flynn: “He would be capable of coming back.”

Trump was also asked whether he would pardon Flynn over charges he lied to the FBI after newly released Justice Department documents showed notes about a conversation between FBI officials who considered whether to try “to get him to lie.” In late 2017, Flynn pleaded guilty to lying to the FBI, but later withdrew the plea.

“It looks to me like Michael Flynn would be exonerated, based on everything that I’ve seen,” Trump said. “I’m not the judge, but I have a different kind of power. But I don’t know if anybody would have to use that power. I’ve never seen anything like it. What they did, what they wrote … it’s just disgraceful.”

“They did everything possible to destroy him. He’s still breathing very strongly. But they hurt him very badly,” Trump said.

FBI documents unsealed on Wednesday show handwritten notes from then-FBI head of counterintelligence Bill Priestap after he met with then-FBI Director James Comey. One of the notes asked, “What is our goal? Truth/Admission or to get him to lie, so we can prosecute him or get him fired?”

Documents go on to show there were discussions about following procedures: “If we’re seen as playing games, [White House] will be furious.”

After initial remarks about COVID-19 and its impact on senior citizens, all of the initial questions from the press pool for Trump were about Flynn, a major departure from the typical coronavirus press briefing. But he was also asked several questions about holding China accountable for the pandemic.

“We’re looking at exactly where it came from, who it came from, how it happened, separately from intelligence and also scientifically,” Trump said. “So we are going to be able to find out.”

When asked if he saw any information indicating it came from a lab in Wuhan, China, he said, “Yes, I have.” However, he later said he couldn’t publicly discuss the nature of the information he saw.

“I think that the World Health Organization should be ashamed of themselves, because they are like the public relations agency for China,” Trump said. “This country pays them almost $500 million a year, and China pays them $38 million a year. Whether it’s a lot, or more, it doesn’t matter. They shouldn’t be making excuses when people make horrible mistakes, especially mistakes that are causing hundreds of thousands of people around the world to die.”

Before taking questions, Trump discussed what the administration is doing for seniors, the demographic with the largest death rate from the coronavirus. In particular, nursing homes have been beset with large numbers of deaths.

“To ensure that our nursing homes are prepared for any future outbreaks, we are announcing the Coronavirus Commission for Safety and Quality in Nursing Homes,” he said.

Trump said the commission will be composed of leading industry experts, doctors, scientists, patient advocates, and state and local authorities.

“It’s a big deal,” the president said. “The commission will convene in May and issue recommendations for further steps we can take to protect our nation’s seniors.”