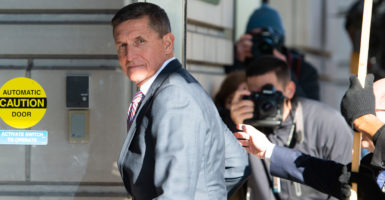 The twists and turns in the prosecution of intelligence expert Michael Flynn have revealed a string of actions by known bad actors in the FBI and prompted President Donald Trump to float the idea of bringing his short-lived national security adviser back into the administration.

Here are five keys to understanding the Flynn case and what’s next.

1. What Is Flynn’s Current Status in Court?

In late 2017, Flynn, a retired Army lieutenant general who specialized in intelligence operations, pleaded guilty to making false statements to the FBI about his conversations with Sergey Kislyak, then the Russian ambassador to the United States.

Flynn, who served just over three weeks as Trump’s first national security adviser, had the opportunity to change his plea in December 2018, but stuck to it while represented by the prestigious law firm of Covington & Burling.

The former national security adviser has filed a motion to withdraw his guilty plea and for the court to dismiss the case.

Flynn said the FBI pressured him to make the guilty plea on the threat of potentially charging him and his son with failing to register under the Foreign Agents Registration Act for work they did in Turkey.

His lawyers at Covington & Burling had advised Flynn that he would not need to register under that law, thus a potential conflict existed with his earlier legal representation, John Malcolm, senior legal fellow with The Heritage Foundation, told The Daily Signal.

“The government and his own former legal team were not turning over exculpatory evidence,” Malcolm said of Flynn.

2. What Do the Released Documents Show?

Flynn resigned Feb. 13, 2017, on his 23rd day as national security adviser, saying that he had inadvertently misled Vice President Mike Pence and others about his talks with Kislyak before Trump took office.

Handwritten notes of their conversation bearing Priestap’s initials indicate FBI officials hoped to get Flynn “to admit to breaking the Logan Act” in talking with Kislyak during the transition period between the presidential election Nov. 8, 2016, and Trump’s inauguration Jan. 20, 1917.

The Logan Act is a 1799 law, never used in a  prosecution, intended to prevent individuals from falsely claiming to represent the federal government when interacting with foreign officials.

Another note says of Flynn and the Department of Justice, the FBI’s parent agency: “If we get him to admit to breaking the Logan Act, give facts to DOJ + have them decide.”

The notes show some indecision, but seem to concede that prompting someone to lie could be “playing games.”

More documents released Thursday show that on Jan. 4, 2017, the FBI’s Washington Field Office determined in a memo it was closing the investigation on Flynn because a review “did not yield any information” to justify continuing to probe whether Flynn was working with the Russian government.

The FBI’s codename for the Flynn case was Crossfire Razor. Americans learned Strzok’s name in 2018 when text messages surfaced in which he disparaged Trump as a presidential candidate in 2016 while investigating Hillary Clinton’s use of a private email server to conduct official business as secretary of state.

Such conversations are not typical for law enforcement, said Malcolm, who was a career federal prosecutor in Georgia from 1990 to 1997 and served as deputy assistant attorney general for the Justice Department’s Criminal Division from 2001 to 2004.

“The notes are very troubling,” Malcolm said, adding, “As a federal prosecutor, I was never involved in a conversation like that.”

Referring to FBI officials, Flynn’s lawyers wrote this week to Sullivan, the judge in the case: “These documents show in their own handwriting and emails that they intended either to create an offense they could prosecute or at least get him fired.”

In February 2018, Sullivan ordered the Justice Department to turn over any exculpatory evidence.

Last year, based on the evidence he had at the time, Sullivan dismissed accusations that the FBI tried to entrap Flynn.

Other evidence that tends to clear Flynn may exist. His former legal team at Covington & Burling said in a court filing in April that it discovered more documents that it didn’t share with Flynn’s new lawyers.

Also this week, Sullivan ordered Covington & Burling to “re-execute a search of every document and communication pertaining to the firm’s representation of Mr. Flynn.”

The notes of FBI officials’ conversations leading up to two agents’ interview of Flynn add more context to already questionable issues that Comey has boasted about.

Strzok was one of the agents who went to the White House to conduct the interview.

Comey, the former FBI director, said in at least one television interview that he took advantage of the fledgling Trump White House to send the agents over to interview Flynn, skipping normal protocols.

And in both those administrations there was a process. And so if the FBI wanted to send agents into the White House itself to interview a senior official, you would work through the White House counsel and there’d be discussions and approvals and it would be there. And I thought, it’s early enough, let’s just send a couple of guys over.

And so we placed a call to Flynn, said, ‘Hey, we’re sending a couple of guys over. Hope you’ll talk to them.’ He said, ‘Sure.’ Nobody else was there. They interviewed him in a conference room in the Situation Room, and he lied to them. And that’s what he’s now pled guilty to.

McCabe, deputy FBI director at the time, reportedly made the initial contact with Flynn about sending over two agents to speak with him. McCabe served for a time as acting director after Trump fired Comey.

“This is no ordinary criminal case. One of the agents who interviewed Lt. Gen. Flynn, Peter Strzok, was later removed from the Russia investigation after his texts demonstrating animus and bias toward the president were discovered,” Sen. Chuck Grassley, R-Iowa, says in an April 27 letter to Attorney General William Barr.

“Additionally,” Grassley writes, “former Director McCabe was fired for lack of candor regarding a leak to the Wall Street Journal, and Lt. Gen. Flynn was an adverse witness in a pending sexual discrimination case against Mr. McCabe at the time Mr. McCabe was supervising an inquiry targeting Lt. Gen. Flynn.”

4. What Related Investigations Are Underway?

The Justice Department is conducting an internal review and the Republican-led Senate is seeking more information.

Barr named Jeffrey B. Jensen, the U.S. attorney for the Eastern District of Missouri, to conduct a review of the Flynn case and determine whether any improprieties occurred.

In the April 27 letter, Grassley asked Barr to produce more information about the Flynn case.

“Simply stated, after years of rampant speculation and publicly reported inconsistencies regarding how the FBI handled the case, it’s time for the public to know the full set of facts relating to Lt. Gen. Flynn, including any and all government misconduct,” Grassley writes, requesting the Justice Department to unseal the records.

Grassley, now chairman of the Senate Finance Committee, was chairman of the Judiciary Committee in February 2017 when he first requested information from the Justice Department about the Flynn case.

On March 15, 2017, Comey had a briefing as FBI director with Grassley and Judiciary’s top Democrat, Sen. Dianne Feinstein of California.

Comey told the senators that he saw no evidence Flynn had lied to investigators, according to Grassley.

Comey repeated that assertion to the House Intelligence Committee while still serving as FBI director. Trump fired him on May 9, 2017.

In August 2017, Grassley asked the Defense Intelligence Agency, which Flynn directed for two years during the Obama administration, to declassify information about the Flynn case.

At several points in 2018, Grassley noted in the letter, he also asked the Justice Department to produce the transcript of Flynn’s phone call with the Russian ambassador.

The Iowa Republican also asked for documents covering the FBI’s interview with Flynn, conducted by Strzok and another agent, on Jan. 24, 2017, at the White House, Flynn did not have a lawyer present.

Grassley cited press reports that Flynn told the White House counsel and chief of staff that the FBI twice told him he wouldn’t be charged, “which is consistent with what Director Comey told me and my staff.”

Trump has floated the idea of a “full pardon” for Flynn.

During a Thursday press conference, however, Trump said he likely wouldn’t even need to use the pardon power.

“It looks to me like Michael Flynn would be exonerated, based on everything that I’ve seen,” Trump said. “I’m not the judge, but I have a different kind of power. But I don’t know if anybody would have to use that power.”

“I’ve never seen anything like it. What they did, what they wrote … it’s just disgraceful,” the president said.