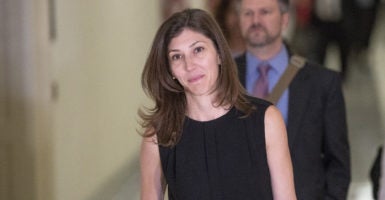 Former FBI lawyer Lisa Page arrives July 13 for a "transcribed interview" before the House Judiciary Committee. She is under scrutiny for emails and texts she exchanged with fellow FBI official Peter Strzok in the months before and after the 2016 presidential election. (Photo: Ron Sachs/CNP/AdMedia /Newscom)

Email messages between two FBI officials suggest widespread use of unsecure communications by the bureau, according to records obtained in a Freedom of Information Act lawsuit.

The records include emails between Peter Strzok and Lisa Page, two FBI officials who were close to investigations of Hillary Clinton and Donald Trump. Neither remains with the bureau.

Judicial Watch filed a FOIA lawsuit after the Justice Department declined to respond to the organization’s Dec. 4, 2017, request asking for:

Both former FBI officials made disparaging remarks about Trump in text exchanges when he was the Republican candidate for president, facing Democratic nominee Clinton in the election Nov. 8, 2016.

But because the FBI has not been cooperative, the agency “will not complete review and production of all the Strzok-Page materials until at least 2020,” according to a Judicial Watch press release Thursday.

The emails Judicial Watch obtained show FBI officials used the unsecure devices while exchanging emails or other electronic texts about how they might share “sensitive data” with the European Union.

“Here we see the top echelon of U.S. cybersecurity and law enforcement officials looking like Keystone Cops,” Judicial Watch President Tom Fitton said in a written statement Thursday. “And the emails show Strzok’s extreme lack of professional behavior in his FBI communications. Judicial Watch is frustrated by the FBI’s slow roll of documents at a rate that will not see all releasable Page-Strzok documents provided until 2020.”

The new revelations from Judicial Watch about the FBI coincide with a report from Fox News on a new batch of text messages between Page and Strzok when they were FBI officials.

In a text to Strzok on Jan. 19, 2017, the day before Trump was sworn in as president, Page reveals that she served as a White House intern when Bill Clinton, Hillary Clinton’s husband, was president.

It is not clear from the text who Page worked for, or what her internship duties were at the White House.

The newly released Strzok-Page texts also provide insight into what a Fox News report describes as a “potential leak operation” within the FBI, and perhaps other intelligence agencies.

The effort to leak information to reporters apparently was organized in anticipation that federal officials would investigate Russian interference in the 2016 election and possible involvement by Trump campaign officials.

Trump tweeted Thursday that the text messages between the two FBI officials are a “disaster and an embarrassment to the FBI & DOJ,” referring to the Justice Department.

More text messages between former FBI employees Peter Strzok and Lisa Page are a disaster and embarrassment to the FBI & DOJ. This should never have happened but we are learning more and more by the hour. “Others were leaking like mad” in order to get the President! ……..

Fox News cited a “lengthy exchange” of texts dated Dec. 15, 2016, in which Strzok comments on the leak operation.

“Think our sisters have begun leaking like mad,” Strzok says in a text to Page. “Scorned and worried, and political, they’re kicking into overdrive.”

Although it’s not clear what Strzok meant by “sisters,” another former FBI agent quoted by Fox News said Strzok could have been referring to another intelligence agency such as the CIA.

Attorney General Jeff Sessions, who heads the Justice Department, has said that Page, who was a lawyer for the FBI, and Strzok, who was chief of the FBI’s counterespionage section when it investigated the Hillary Clinton email scandal, exchanged more than 50,000 text messages. The FBI is part of the Justice Department.

Page and Strzok exchanged the text messages while the two reportedly were having an extramarital affair. Their texts made clear that they were opposed to Trump and supportive of  Clinton during the 2016 campaign.

Sessions recused himself from overseeing the Russia probe because he was a campaign adviser to Trump.

Special counsel Robert Mueller, who is investigating Russian interference as a result, removed Strzok from the probe when the texts surfaced.

Page served briefly on Mueller’s team before returning to the FBI’s Office of General Counsel in July 2017. She left the FBI this past May.

The FBI fired Strzok in August, after his public testimony before two House committees.

Page also testified before lawmakers, but behind closed doors.

The Page-Strzok text messages came to light in December 2017, discovered as part of the Justice Department inspector general’s review of the probe of Clinton’s use of a private email server to conduct official business when she was secretary of state from 2009 through 2012.