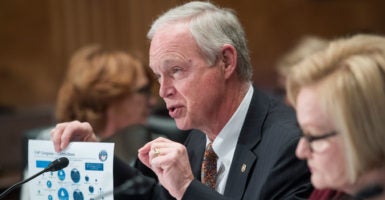 In one electronic text message on April 10, 2016, FBI official Peter Strzok told agency lawyer Lisa Page: “Gmailed you two drafts of what I’m thinking of sending Bill, would appreciate your thoughts. Second (more recent) is updated so you can skip the first.”

Strzok expressed frustration about being “left out of the loop,” according to the report from a Senate committee. It is not clear who “Bill” is.

Hans von Spakovsky, a senior legal analyst at The Heritage Foundation and a former Justice Department official, told The Daily Signal that use of private email makes it possible for federal employees to evade information requests.

“If an employee is using a personal email to discuss official business, then he is avoiding complying with the Federal Records Act and he is avoiding the Freedom of Information Act,” von Spakovsky said.

“I know that when I was at DOJ, we were told not to discuss any official business in private emails for these reasons, and because much of what we discussed was confidential and should not be disclosed. Private emails are notoriously less secure,” he said.

Attorney General Jeff Sessions, who heads the Justice Department, has said that Page and Strzok, chief of the FBI’s counterespionage section when he investigated the Hillary Clinton email scandal, exchanged more than 50,000 text messages while reportedly having an extramarital affair.

The two FBI officials expressed anti-Trump and pro-Clinton sentiments while texting each other. Special counsel Robert Mueller, who is investigating Russian interference in the 2016 election, removed Strzok from the probe when the texts surfaced.

Johnson also asked the Justice Department to turn over additional information about FBI communications by Wednesday, which is both Valentine’s Day and Ash Wednesday. By publication deadline, his committee staff had not responded to inquiries on whether the department had done so.

The Daily Signal asked the Justice Department for a response to the evidence that Strzok and Page used private email accounts while transacting official FBI business, what policy is on such use, and also whether the department would meet Johnson’s Feb. 14 deadline.

“We have been working with the committee to respond to their request within a reasonable timeframe,” Ian D. Prior, the agency’s principal deputy director of public affairs, said in an email response.

Prior did not address the other issues.

The Justice Department’s Ethics Handbook for On and Off-Duty Conduct tells employees:

You may not use your DOJ contact information including email address for non-official matters except as emergency contact information and for persons such as close family and friends, children’s school, and in similar limited circumstances, where it is clear your communication is not on behalf of the department and you are not attempting to exert official influence.

It is not clear from the handbook what the FBI policy is on use of private email accounts for official business.

In a Jan. 31 letter to Deputy Attorney General Rod Rosenstein, Johnson inquires about an April 10, 2016, chain of text messages between Strzok and Page suggesting the two agents used Gmail to correspond while engaged in official FBI duties. (Sessions recused himself from matters related to the Russia probe.)

Johnson has asked Justice to turn over text messages exchanged between Strzok and Page between Dec. 14, 2016, and May 17, 2017. Those texts were said to be “missing,” but since have been recovered through the efforts of the agency’s inspector general.

Some of the Page-Strzok text messages already public “hint at broader record-retention issues with the FBI’s Samsung mobile devices and that FBI employees sought to procure iPhones for their use,” Johnson tells Rosenstein in the Jan. 31 letter.

Johnson’s committee published a report, “The Clinton Email Scandal and the FBI Investigation of It,” highlighting findings in the Page-Strzok text messages.

“Text messages exchanged between Strzok and Page suggest that FBI officials used non-official email accounts and messaging programs to communicate about FBI business,” the report says, going on to cite the April 10, 2016, text in which Strzok says he “gmailed” drafts to Page.

On Oct. 25, 2016, Page texts Strzok about a letter to Congress regarding the Clinton email investigation, which had resulted in no charges related to Clinton’s use of a private email server to conduct official business when she was secretary of state from 2009 through 2012. The election followed days later, on Nov. 8.

Page: “Remind me I need to ask you something. Tomorrow is fine.”

Strzok: “sure. You can also imsg [iMessage] me.”

Strzok and Page also discussed the possibility that Page would receive an FBI-issued iPhone, for which the FBI information technology office proposed to stop following “security/monitoring” requirements.

These texts raise questions about the FBI’s retention of records associated with its investigation, committee staff say.

all documents and communications, including but not limited to emails, memorandum notes, text messages, iPhone instant messages, and voicemails, for the period January 1, 2016 to the present referring or relating to the FBI’s Midyear Exam investigation, the presence of classified information on Secretary of State Clinton’s private email server, or candidates for the 2016 presidential election …

Trump fired Comey in May. FBI Director Christopher Wray removed McCabe from his post Jan. 29, after a declassified memo from a House committee underlined a reference to him in a Page-Strzok text.