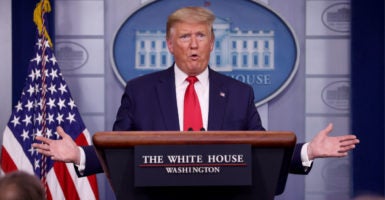 President Donald Trump, pictured on April 3, has defended the use of terms like "Chinese virus" to refer to COVID-19, which originated in China. (Photo: Win McNamee/Getty Images)

A majority of American adults agree with using the term “Chinese virus” to describe the coronavirus, despite media members pillorying President Donald Trump for using that term, three polls showed.

Three consecutive national surveys by the Harris Poll found that more than 50% of Americans said they somewhat or strongly agree with Trump using the term “Chinese virus.”

The poll results make for a stark contrast with the national media’s reaction to the term “Chinese virus.”

MSNBC anchor John Heilemann said on air in March that Trump’s use of the term “Chinese virus” is “nakedly racist and obviously racist and blatantly racist.”

Other journalists, from Vox writers to The New York Times editorial board, have denounced the president’s use of the term.

But the American public seems to disagree.

The three Harris polls, all of which are from late March or early April, showed 52%, 54% and 52% of Americans agreeing with Trump.

The most recent Harris poll, which surveyed 1,993 adults between April 3 and 5, also found that an overwhelming majority of Americans hold the Chinese government responsible for the virus’ spread. That’s in line with scientific research on the subject.

One study found that up to 95% of COVID-19’s spread could have been prevented if the Chinese government had acted three weeks sooner than they did.

A majority of Americans, 58%, agree that China should “be required to pay other countries for the spread of the virus,” the most recent Harris poll found.