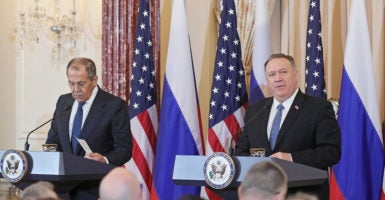 The Trump administration demonstrated it is keeping its eye on the ball with the State Department’s new designation of the Russian Imperial Movement as a terrorist organization. Pictured: Russia's Foreign Minister Sergei Lavrov and U.S. Secretary of State Mike Pompeo give a joint news conference following their meeting at the United States Department of State. (Photo: Alexander Shcherbak/TASS/Getty Images)

With so many in the U.S. and abroad at home and online during this COVID-19 pandemic, homeland security, counterterrorism, and law enforcement officials have kept an eye on self-radicalization and extremist recruitment over the internet.

The Trump administration demonstrated it is keeping its eye on the ball with the State Department’s new designation of the Russian Imperial Movement as a terrorist organization and its leaders, Stanislav Anatolyevich Vorobyev, Denis Valliullovich Gariyev, and Nikolay Nikolayevich Trushchalov as Specially Designated Global Terrorists.

The designation, the first of its kind for a white supremacist group, follows growing concern in the administration that such transnational groups can recruit all over the world and train to carry out racially or ethnically motivated terrorism.

The Russia Imperial Movement provides paramilitary-style training to white supremacists and neo-Nazis and tries to radicalize Europeans and Americans against their perceived enemies. It is led by Vorobyev, its founder; Gariyev, the head of its paramilitary arm, the Imperial Legion; and Trushchalov, the coordinator for external relations.

In 2016, two Swedish individuals who attended training courses at one of the group’s St. Petersburg facilities went on to commit a series of bombings in Gothenburg, Sweden, targeting a refugee shelter, a shelter for asylum-seekers, and a café. They were convicted in Sweden, and the prosecutor blamed the Russian Imperial Movement for their terrorist radicalization and training.

The group also provided training to white supremacists from Germany, Poland, and Finland, and has tried to recruit individuals from U.S.-based white supremacy groups.

This Specially Designated Global Terrorist is not the same as the Foreign Terrorist Organization designation. This designation was made possible by President Donald Trump’s  Executive Order 13886—the most significant expansion of federal terrorist designation authorities since 9/11.

The amendment empowers the State Department to designate groups and individuals that participate in training to commit acts of terrorism and the leaders of such groups.

Before, it was more difficult to make such designations because it generally was necessary to tie them to specific attacks. The new authorities allow the State Department to go after training to participate in terrorism, fundraising for terrorism, facilitation of terrorism, and solicitation.

The designation focuses on foreign activity, not domestic, and on violent acts, not constitutional speech.

The effect of the designation permits the Treasury Department’s Office of Foreign Assets Control to block any American property or assets that belong to the group, denying them financial resources they need to continue training.

It likewise bars Americans from doing business with the Russian Imperial Movement, restricts travel of members to the U.S., and makes it easier to put members on watch lists and tighten security with respect to the group.

Leaders of extremist groups and lone wolves alike view current pandemic circumstances as an opportunity to recruit members to carry out evil acts.

Two weeks ago, the FBI shot and killed Timothy R. Wilson, a man suspected of planning to attack a Missouri hospital after the local mayor issued a stay-at-home order for the city’s residents.

Wilson previously had expressed racist and anti-government sentiments and considered various targets, including a school with a large number of black students, a mosque, and a synagogue.

Authorities said Wilson felt compelled to act because of the mayor’s order and intended to use a car bomb to cause mass casualties.

Furthermore, we recently passed the anniversary of the Mar. 15, 2019, Christchurch, New Zealand, massacre, for which the self-avowed white supremacist gunman pleaded guilty for killing 51 people at two mosques.

Then on Aug. 3, 2019, a man who claimed to be inspired by the Christchurch shooter targeted Mexicans in an El Paso Walmart, where he shot and killed 22 people and injured 24 others.

These events show why the U.S. and other governments must remain vigilant against acts of terrorism.

This unprecedented designation by the government of a transnational white supremacist group is an important first step in securing our homeland from terrorism.

Terrorist individuals and groups abound worldwide, and it is essential the U.S. government be able to take action against them to keep America safe.