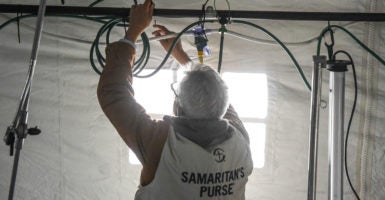 Mount Sinai Health System says it is "unified" with Samaritan's Purse in a "mission to provide the same world-class care to anyone and everyone who needs it." Pictured: A worker with Samaritan's Purse sets up power and oxygen lines March 30 in a 68-bed field hospital set up by the Christian relief organization in New York City's Central Park to treat COVID-19 patients. (Photo: Stephanie Keith/Getty Images)

After New York City became America’s epicenter for COVID-19 infections, Gov. Andrew Cuomo called on medical personnel from around the nation to help if they can.

Despite the fact that New York City said it desperately needed the 68-bed field hospital constructed by Samaritan’s Purse in Central Park’s East Meadow, critics complained that Graham and his Christian organization are “anti-LGBTQ.”

True, Samaritan’s Purse does ask that its employees and volunteers abide by a statement of faith acknowledging that marriage is between a man and a woman.

Despite no evidence that employees or volunteers associated with Samaritan’s Purse have mistreated anyone, particularly based on opposing political views and specifically the LGBT agenda, local politicians immediately sounded the alarm.

NBC News in New York reported that Mayor Bill de Blasio refused to visit the site, saying that the views of Samaritan’s Purse are “very troubling” to him and that he will keep an eye on the situation.

New York police on Sunday arrested a well-known activist known as Reverend Billy near the field hospital. Wearing a pink suit and a bandana around his face, William Talen, 69, was charged with trespassing, disorderly conduct, and resisting arrest.

Talen claimed to be upset about Samaritan’s Purse, citing the group’s deeply held religious beliefs that he regards as biased against lesbian, gay, bisexual, transgender, or “queer” individuals.

Mount Sinai Health System oversaw planning and construction of the field hospital, and of course maintains that the respiratory care Samaritan’s Purse offers is for anyone with COVID-19, regardless of ideology or sexuality.

According to a formal statement from Mount Sinai, the New York health network and Samaritan’s Purse are “unified in their mission to provide the same world-class care to anyone and everyone who needs it, no questions asked.”

Here we have a situation where Cuomo called for help and a faith-based organization answered that call—as they often do.

Yet as Samaritan’s Purse works to prevent people from becoming increasingly ill or dying, local politicians are creating divisiveness and starting a culture war where there isn’t one.

For years we’ve been told that conservative Christians are the aggressors in the culture wars: They won’t bake the cake. They won’t paint the painting. They won’t honor the commitment. They won’t officiate the marriage. They won’t leave the abortion clinics.

I’m sure the progressive left, and particularly the evangelical left, would claim that the reason New York officials and others reacted with such immediate skepticism and criticism is that religious people and organizations for years, if not decades, have used their beliefs as a tool—a shroud, even—for bigotry and discrimination in America.

With a few exceptions, this is not the case: It is not discrimination to espouse closely held traditional religious beliefs that happen to differ from the left’s political agenda.

Many faiths include centuries-old beliefs that civilizations have based their own moral codes upon, including the act of charity.

Samaritan’s Purse, like many other faith-based aid organizations, genuinely is helping. The war on religious organizations that practice their faith has been based on a false premise.

Although there was no good time to reignite such battles, now especially is not the time.