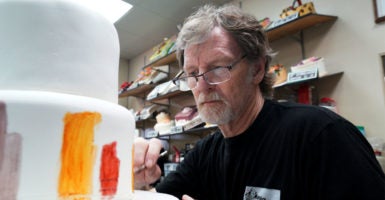 The Supreme Court will hear oral arguments in Masterpiece Cakeshop v. Colorado Civil Rights Commission on Dec. 5, in what will be one of the most closely watched cases of the term.

This is the case of Jack Phillips, owner of Masterpiece Cakeshop in Lakewood, Colorado, who declined to design a custom cake for a same-sex wedding.

The same-sex couple filed a complaint with the Colorado Civil Rights Commission, which resulted in a finding that Phillips engaged in sexual orientation discrimination in violation of the state’s public accommodation law.

Now, the case is before the Supreme Court, and the justices will consider Phillips’ free speech and free exercise claims. More than 100 groups have filed amicus briefs supporting one side or the other.

The Cato Institute, Reason Foundation, and Individual Rights Foundation argue in their amicus brief that Phillips’ custom cakes are an artistic expression that deserves protection under the First Amendment’s free speech clause.

The three groups cite Wooley v. Maynard, a 1976 Supreme Court decision that makes clear that the First Amendment protects against compelled speech: “The right to speak and the right to refrain from speaking are complementary components of … ‘individual freedom of mind.’”

In Wooley, the court considered whether New Hampshire could force Jehovah’s Witnesses to display “Live Free or Die” on their license plates, over their objections to displaying a message that violates their religious beliefs.

In ruling against the state, the court explained that forcing people to “becom[e] the courier[s] for … messages with which they disagree” interferes with the right to “refuse to foster … an idea they find morally objectionable.”

The three libertarian groups state that Wooley “secure[d] an important constitutional right to which all speakers are entitled—whether religious or secular, liberal or conservative, pro or anti-same-sex-marriage.” And this right applies to both the creation and distribution of speech.

Indeed, the groups point out that requiring someone to create speech “is even more of an imposition … than is requiring the person simply to engage in the ‘passive act of carrying the state motto on a license plate.’”

They also explain why the court should recognize Phillips’ trade of baking custom cakes as a form of art. They point out: “The art of baking and decorating cakes, particularly wedding cakes, exhibits all the characteristics of other expressive formats that this Court has recognized as constitutionally protected.”

The Supreme Court has previously found that many other forms of art qualify as speech—such as music without words, dance, theater, and movies. Even tattooing is considered expressive activity, as the 9th U.S. Circuit Court of Appeals ruled in Anderson v. City of Hermosa Beach (2010).

Though Phillips’ “media are icing and chocolate rather than ink or paint,” the three groups maintain, “that does nothing to diminish the artistic content of his work.”

“Baking and decorating a cake,” they continue, “involves hours of effort and a large range of artistic decisions. … Clients pay good money for such cakes, precisely because of the bakers’ expressive decisions regarding flavors, textures, structure, and decorations.”

But they draw the line at compelled expression, explaining that the First Amendment would not protect “caterers, hotels, and limousine companies” if they asserted a free speech right to refuse services for same-sex weddings. That’s because the free speech clause covers expression—not “all human endeavors.”

The libertarian groups conclude their brief noting that it’s understandable that a couple would be offended if a baker refused to make a cake for their wedding. But “the First Amendment does not treat avoiding offense as a sufficient interest to justifying restricting or compelling speech.”

For these reasons, the Cato Institute, Reason Foundation, and Individual Rights Foundation maintain that the Supreme Court should rule in favor of Phillips’ free speech claims and recognize custom wedding cakes as an expressive activity that is protected by the First Amendment.