Mark Meadows to Start as White House Chief of Staff 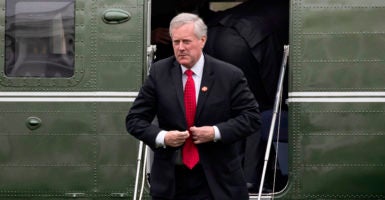 Rep. Mark Meadows, R-N.C., was expected to resign Monday from the House and begin serving Tuesday as White House chief of staff.

A Trump administration official confirmed to The Daily Signal that Meadows resignation will go into effect Monday evening and his first day at the White House is on Tuesday.

President Donald Trump announced in a March 6 tweet that Meadows would become his new chief of staff, but did not announce a start date.

Fox News reported that Meadows told the network that he would resign Monday afternoon and begin his new position at the White House the next day.

After attending the annual Conservative Political Action Conference in late February in suburban Maryland, where someone had tested positive for the coronavirus, Meadows announced that he was going into a 14-day self- quarantine.

Meadows is a vocal member and former chairman of the Freedom Caucus, made up of some of the most conservative Republicans in the House.

The Freedom Caucus initially clashed with Trump in early 2017 over the best course of action for repealing Obamacare.

However, Trump and the caucus began to work closely on conservative agenda items such as rolling back taxes, cutting regulations, and enforcing immigration laws.

Meadows has been a member of the House Oversight and Reform Committee, where he pushed investigations of improper conduct in the Justice Department,  as well as a member of the Foreign Affairs Committee.