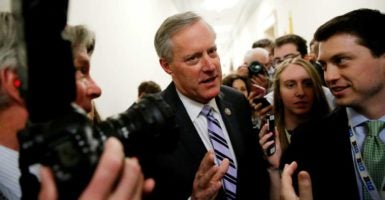 House Freedom Caucus Chairman Mark Meadows, R-N.C., speaks to reporters after meeting with his caucus members about their votes on a potential repeal of Obamacare on Capitol Hill. (Photo: Jonathan Ernst /Reuters/Newscom)

A group of conservative leaders defended the House Freedom Caucus for sticking to its principles in the debate over the House health care bill on Friday.

“I urge the president to rethink these attacks on the Freedom Caucus,” said L. Brent Bozell III, a Republican advocacy leader, during a conference call filled with top conservatives defending the Freedom Caucus against President Donald Trump’s recent attacks directed toward the group.

Bozell’s comments supporting the group came one day after Trump warned the Freedom Caucus members to get on board with his agenda, or else face possible consequences in 2018.

“The Freedom Caucus will hurt the entire Republican agenda if they don’t get on the team, & fast. We must fight them, & Dems, in 2018!” Trump tweeted.

The Freedom Caucus will hurt the entire Republican agenda if they don’t get on the team, & fast. We must fight them, & Dems, in 2018!

Additionally, Trump has already fired shots at two of the groups on the call for their involvement in the GOP health care debacle: Heritage Action for America, the lobbying arm of the Heritage Foundation, and Club For Growth—both groups voiced strong disapproval of the House health care bill, known as the American Health Care Act.

>>>Ohio Conservatives to Trump: Work With Freedom Caucus Members, Not Against Them

“Democrats are smiling in D.C. that the Freedom Caucus, with the help of Club For Growth and Heritage, have saved Planned Parenthood & Ocare!” Trump tweeted after the House leadership pulled its health care legislation last Friday due to lack of support.

Democrats are smiling in D.C. that the Freedom Caucus, with the help of Club For Growth and Heritage, have saved Planned Parenthood & Ocare!

Aside from defending House conservatives, the conservative speakers mentioned their disdain for the failure of Republicans to repeal the Affordable Care Act and criticized GOP centrists who pushed what one speaker referred to as “Obamacare 2.0.”

These attacks from Trump against the leading conservative organizations and lawmakers are a mistake, claimed Adam Brandon, president of FreedomWorks.

“The House Freedom Caucus is Donald Trump’s No. 1 ally in draining the swamp. All we’re looking for is the GOP to keep their promise in repealing Obamacare, and then we can keep the agenda moving forward,” Brandon said.

Support for the Freedom Caucus’ resistance to the GOP health care bill was echoed throughout the call, as Mike Needham, CEO of Heritage Action, described the conservative congressmen as the only “grown-ups in the room,” compared to Trump, House Speaker Paul Ryan, and other Republicans who promoted the American Health Care Act.

“I don’t think anybody could honestly call this bill good. The Republican Party has campaigned on bringing down premiums for seven years, yet this bill would keep them going up,” Needham said.

Andy Ross, vice president of the Club for Growth, harped on the point of campaign promises, saying, “The question isn’t why the Freedom Caucus is being so hard-nosed, they are the ones actually keeping their promise … the people breaking their campaign pledges to the American people are the moderates who are holding [Obamacare repeal] up.”

Ross also said that, after promising a full repeal of Obamacare, centrist Republicans in the House flip-flopped and now “actually support a lot of things that are in Obamacare.”

Centrist House Republicans in the Tuesday Group were slated to meet with the Freedom Caucus this week to discuss possible compromises on health care, but the meeting fell through after Rep. Chris Collins, R-N.Y., signaled to the centrist caucus that it should avoid talking to conservative colleagues.

In response to Trump saying that Republicans should wait for Obamacare to “explode” and then act to replace it, Bozell warned that “the Republican Party will own health care” if that happens.