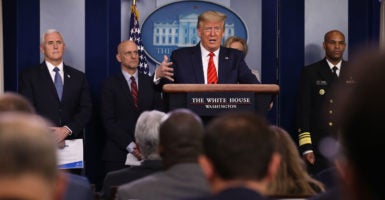 The coronavirus pandemic has become a health crisis that’s almost unprecedented in our lifetimes.

As our country and the world race to contain the spread of COVID-19, it’s important that we all stay informed on how to protect ourselves and our families and neighbors.

This is a time for journalists in a free country to demonstrate how they can bring vital and accurate information to the public when it’s needed most.

Many journalists have been doing just that, and at great risk.

Unfortunately, the media has made some serious missteps in recent months and acted unseriously in this serious time.

Here are three big media misses during the coronavirus pandemic.

While there is certainly more that Americans and the Trump administration could have done in preparation for the tidal wave that has been the coronavirus outbreak, one early decision likely made a big difference in controlling its scope.

On Jan. 31, the Trump administration instituted a travel ban to stop the flow of infected people from China to the United States.

“The travel ban with China made a difference,” Dr. Tom Frieden,  former director of the Centers for Disease Control and Prevention and current head of the global health initiative Resolve to Save Lives, told USA Today.

“It resulted in a significant delay in the number of people coming in with infection and because of that, that bought time in the U.S. to better prepare,” Frieden said. “And yet, that time wasn’t optimally used.”

However, critics of the Trump administration roundly attacked the China travel ban as ineffectual, anti-science, and xenophobic.

My colleague, Lyndsey Fifield, had an excellent breakdown on Twitter of the media’s coverage of the travel ban.

At the time, the World Health Organization recommended against travel bans because it was relying on China’s disinformation and failure to report person-to-person transmission of COVID-19.

Good on the administration not to rely on information that had gone through the filter of the Chinese communist government, which clearly has been dishonest about the outbreak since the beginning.

But media outlets didn’t stop with attacks on the administration’s China travel ban. They also widely condemned the more recent restriction on travel from Europe—some calling this move a product of xenophobia as well.

The fact is, contrary to the idea that viruses don’t recognize borders, borders are an important method to limit contact with people infected in a global pandemic. It’s the transmission between individuals that causes COVID-19 to spread quickly, one of the reasons why our whole country is practicing various forms of social distancing and in some places is in near total lockdown.

The idea that the federal government took precautions and shut down borders to prevent the spread of COVID-19 is anathema in a media environment in which the concept of borderless societies is taken as a given.

But if this moment demonstrates anything, it’s that border enforcement matters. It matters not just because of issues such as crime, culture, terrorism, and economics, but also in the realm of public health.

Working alongside the attacks on travel restrictions is the media’s ridiculous and unserious condemnation of those who call the new coronavirus the “Chinese virus,” “China virus,” “Wuhan virus,” or any other name that links the pandemic to its country of origin.

In January and February, most media outlets had no problem using the terms China virus or Wuhan virus. But suddenly a switch flipped, and prominent journalists began to attack these terms as racist.

This flip-flop followed a wave of Chinese propaganda aimed at attacking the term “China virus” as racist and linking the outbreak to the United States.

It was a jarring reminder of the unserious nature of “woke” culture that at a press conference the day after Trump used the phrase “Chinese virus” on Twitter, he received four questions about it.

Clearly, when the nation is shut down due to the most threatening pandemic since the Spanish flu and Americans are facing mass unemployment and possibly a deep recession, our esteemed press is doing the all important work of language policing.

Unfortunately, this big media miss may make it more difficult to get the word out on COVID-19 treatments.

Trump and others—including New York Gov. Andrew Cuomo, a Democrat—have touted the possibility that a drug long used to treat malaria may be effective in treating COVID-19.

This would of course be a huge breakthrough in stemming the pandemic if it proves to be effective. One of the malaria treatments contains the prescription drug hydroxychloroquine.

This story soon broke, with similar headlines in countless media outlets and countless journalists spreading it far and wide.

This stemmed from an NBC News report in which the dead man’s wife, who also ingested the substance, said they took it because of Trump’s suggestion that it might be a cure. She would not reveal her name.

“We saw Trump on TV—every channel—& all of his buddies and that this was safe,” the woman said, according to NBC News. “Trump kept saying it was basically pretty much a cure.”

What the couple reportedly ingested, though, actually was a  fish bowl cleaner containing chloroquine phosphate, a different substance used to get rid of parasites.

For the sake of comparison, if it needs one: Bleach is a pretty effective chemical to clean with, but if you drink it, you’ll end up in a hospital. This couple certainly did not take a medication prescribed by a doctor.

It’s highly deceptive to connect Trump’s comments to this couple’s reported attempt to treat themselves with an industrial chemical.

Some news outlets were good enough to correct their headlines and stories.

Axios has deleted its tweet and made a correction.

Good for Axios and the other outlets that made corrections. Hopefully this deceptive story won’t stop the spread of medications that may prove vital in the future.

Also, let’s hope that the prolonged and serious pandemic that the country faces will spur the media to focus on the crisis at hand and less on the vapid virtue signaling and sensationalized digs at the president that have been their hallmark for years now.