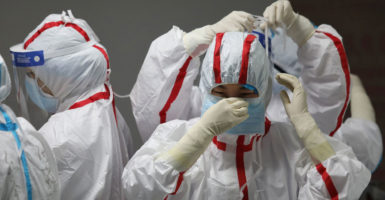 Even the threat of global pandemic apparently can’t slow the hysterical culture of modern political correctness.

Apparently, according to some in the news media and even Congress, it’s racist to refer to coronavirus as “the Wuhan virus” or “Chinese coronavirus” or any other name that identifies the likely city, province, or country of origin.

The fervor over the naming convention for the new coronavirus disease, which health officials often call COVID-19, really began when Rep. Paul Gosar, R-Ariz., tweeted March 8 that he had self-quarantined after coming into contact with a “person who has since been hospitalized with the Wuhan Virus.”

Gosar was hit with a deluge of criticism from some in the media, including David Gura of NBC News and Chris Hayes of MSNBC, who claim that using the name of the city or country where the disease likely originated is somehow inappropriate and racist.

Some legislators jumped in too.

The Washington Post published an article, headlined: “Is it racist to call coronavirus the ‘Wuhan Virus’? GOP congressman’s self-quarantine tweet sparks a debate.”

This, as Becket Adams of the Washington Examiner pointed out, comes a few months after the Post published a piece with this headline: “Scientists are unraveling the Chinese coronavirus with unprecedented speed and openness.”

CNN White House correspondent Jim Acosta chimed in, saying that when President Donald Trump called coronavirus a “foreign virus” Wednesday night in his Oval Office address to the nation, he was engaging in “xenophobia.”

Rep. Ayanna Pressley, D-Mass., a member of the progressive “Squad” in the House, said in a hearing Thursday: “Since the beginning of the COVID-19 outbreak, we’ve seen not only the spreading of the virus but also a rapid spreading of racism and xenophobia.”

Pressley blamed a decline in business at Chinese restaurants in her district on racism, specifically linking that development to House members referring to “Chinese coronavirus.”

All of this commentary is absurd, if not predictable.

For some in the media and Congress, apparently the most important method to contain the pandemic is to police language and find reasons to call other Americans, and Trump, racist.

But perhaps more perniciously, this language policing aids the communist Chinese government in its effort to deflect blame from its deeply irresponsible handling of the initial outbreak.

As Jordan Schachtel wrote for the Washington Examiner, the Chinese government desperately wants the world to think that identifying COVID-19’s origin as China is racist and unacceptable.

Our legacy media is simply following the lead of China’s officials and state-backed media outlets.

In early March, when Secretary of State Mike Pompeo referred to the “Wuhan virus,” China’s Foreign Ministry spokesman, Zhao Lijian, called it “highly irresponsible” for anyone to use the phrases “China coronavirus” or “Wuhan coronavirus.”

Note also that this same government spokesman engaged in a wild conspiracy theory and implied Thursday that the U.S. Army was responsible for bringing coronavirus to Wuhan. He demanded “answers” from the United States.

So says a mouthpiece for a communist regime that intentionally hid information about the deadly virus from its citizens and the world for months and still attempts to bury information that could aid in combating the outbreak.

The same regime is responsible for various other abuses of the basic rights of its citizens to save face and hold onto its power.

Instead of attacking other Americans for what they call the virus, perhaps the American press can restore some of its lost credibility by focusing on providing information about how to protect themselves and help prevent the spread of the disease.

Just as importantly, Americans must show the world the strength of a free society in how it tackles a crisis and continue to shine a light on the practices of an authoritarian, communist government that put millions of its citizens and others across the globe at higher risk.