With Coronavirus, the Chinese Repeat the Soviets’ Chernobyl Failure 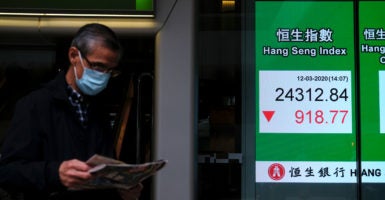 Beijing’s propaganda blitz aims to convince the world that the Chinese government had nothing to do with the global spread of COVID-19. Pictured: A man reads a newspaper Thursday near an electronic display board showing a stock market index in Hong Kong's central business district. (Photo: Vernon Yuen/NurPhoto/Getty Images)

Is the coronavirus China’s Chernobyl? It could be—but only if we hold the Chinese Communist Party accountable for their early missteps that allowed the virus to spread unchecked for weeks.

Chernobyl is the site of the worst nuclear power plant accident in history. Many consider it a pivotal cause of the collapse of the Soviet Union.

On April 26, 1986, a routine test at Chernobyl led to an explosion and the release of 400 times more radiation than the atomic bomb that the U.S. dropped on Hiroshima.

The accident immediately killed two, and at least 28 others died from radiation poisoning within months. Ukraine, where the plant was located, has estimated that 125,000 later died from the effects of the radiation.

The Soviet Union immediately blamed human error. But when the Soviets investigated the cause of the explosion, they determined that the RBMK reactor, a large and powerful reactor built cheaply and operated by local personnel, had design flaws that caused the meltdown.

In his 2018 book on the disaster, “Chernobyl: The History of a Nuclear Catastrophe,” Harvard historian Serhii Plokhy argues that the Soviet bureaucratic tradition that created Chernobyl made the explosion inevitable. Plokhy writes that Moscow demanded unrealistic deadlines to appear impressive on the world’s stage, causing workers at Chernobyl to cut corners on safety and costs.

If this sounds familiar to you, it may be because Plokhy’s thesis has since made its way into popular culture via the HBO series “Chernobyl.”

In the final episode, a scientist testifying before a Soviet court explains how the nuclear reactor’s graphite tips sped up the reaction instead of slowing it down.

The prosecutor asks why the reactor was designed this way. The scientist replies: “It’s cheaper.”

The viewer infers this remark as damning the entire Soviet bureaucracy.

The World Health Organization just declared the new coronavirus disease, COVID-19, a pandemic. But how did it start?

That, so far, is unclear. And we’re not likely to get answers anytime soon, since Beijing’s new talking point is that the virus may not have “originated” in China.

Of course, there is no evidence the virus spread in any human population before it spread in China. So one is left to wonder if the Chinese are insinuating someone brought the virus to China in a vial, which is probably their goal.

This new talking point is part of Beijing’s larger propaganda blitz to convince the world that the Chinese government had nothing to do with the global spread of COVID-19.

However, the truth is that China let the virus spread unchecked for weeks. Systematic efforts to downplay its threat eliminated the possibility that we could contain the virus and instead we only can hope to mitigate it.

To quote one of China’s foremost epidemiologists, if the government had acted sooner, “the number of sick would be greatly reduced.”

The first cases were recorded in Wuhan in early December. By the end of that month, authorities understood there was an outbreak and an unknown virus.

An accurate picture of what happened next is impossible. Chinese authorities seemed to have muzzled scientific reporting, because case numbers were stagnant and contained to Wuhan province even though patients were testing positive in Thailand, Singapore, and Japan.

During the next month or so, Chinese authorities not only failed to act or treat the virus seriously, they actively censored anyone discussing it. Eight doctors discussed the virus on social media—in a private chat group, nonetheless—but the Chinese government detained them and shut down their discussion.

Authorities also lied, insisting the coronavirus could not spread human to human, even though they knew it could.

They also blocked American medical professionals from visiting China. The U.S. Centers for Disease Control and Prevention, the premier infectious disease research body in the world, first offered to visit Wuhan on Jan. 6, but China rejected the idea.

It wasn’t until Jan. 20 that President Xi Jinping finally acknowledged the crisis and, on Jan. 23, ordered that Wuhan be locked down. But by then, it was too late.

An estimated 5 million of Wuhan’s residents unknowingly traveled to other parts of the country and overseas. Every Chinese province and region in China had a case, and Beijing, Shanghai, and Hangzhou were locked down.

The central government in Beijing has tried to blame local officials for the delayed response to COVID-19, but like the Soviets and Chernobyl, the blame lies with the system.

The Soviet trademark was bureaucratic tradition and economic malaise. Unique to communist China, however, is a dystopic penchant for misinformation and censorship.

If China’s leaders hadn’t become embarrassed by the outbreak and tried to cover up its spread, the world may have had a better chance to prepare for this.

Instead, we have a pandemic. China shoulders most of that blame. Rather than succumb to the propaganda and spin of Chinese officials, the world must hold them accountable for mishandling this outbreak.