EXCLUSIVE: How VA Is Prepared to Handle Rising Rates of Veterans With Coronavirus 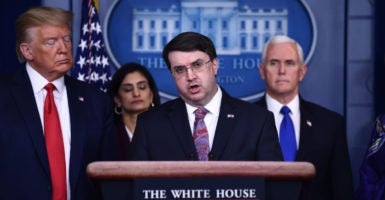 Secretary of Veterans Affairs Robert Wilkie speaks during the daily briefing on the novel coronavirus, COVID-19, at the White House on March 18. (Photo: Brendan Smialowski/AFP/Getty Images)

But he notes the department took major precautionary measures by curbing visits and expanding telehealth, and stands ready for potentially treating populations beyond veterans.

As of early Monday, 204 U.S. military veterans tested positive for the coronavirus, or COVID-19. Of that, about one-third—or 65 veterans—live in New Orleans. Wilkie noted that 113 of the 204 are at home, not in need of hospital care.

“Our system is not overwhelmed across the country, but we are concentrating on those pockets the rest of the country sees,” Wilkie said in an interview with The Daily Signal. “In the Seattle area, we have nine [cases]. New York Harbor, which is Manhattan, we have 10, but the Bronx has eight. We are paying attention to those pockets.”

Last week, the number of veterans who tested positive was only 44, indicating a rise in cases, consistent throughout the country as more testing becomes available.

The VA dispatched mobile veteran centers and mental health centers—critical during a time of isolation—across the country in New York, New Orleans, and in San Francisco.

“We are one of the few allowed into San Francisco while they are in the middle of their lockdown,” the secretary said.

Last week, the Department of Veterans Affairs sent several million text messages to the nation’s veterans, their family members, and their caregivers—two weeks after sending millions of emails—on changes in veterans care to protect the patients.

“What we are telling veterans now, no matter whom that veteran happens to be, if you don’t feel well, call us,” the secretary said. “Don’t come in. Call us. Tell us what’s wrong and we will point you in the right direction.”

The most significant steps are halting elective surgeries and halting half of all routine doctor appointments. Also, veteran community living centers where large populations of older veterans are living are temporarily closed to visitors.

“It was a very sad decision that we had to make because we are cutting off these folks who have been at Iwo Jima or have been at the Chosin Reservoir in Korea or Khe Sanh in Vietnam and we are telling them they can’t see their families,” Wilkie said. “We had to do that.”

There are 33,404 confirmed cases of the coronavirus in the United States, and 400 deaths, according to the Centers for Disease Control and Prevention.

The state of Louisiana, with the highest rate of veteran cases, has a total of 1,035 cases for the full population, according to the CDC. New York state has 15,168 overall cases. Washington state has 1,196 confirmed cases of the general population and California has 1,709.

Asked if the VA could open up its hospitals to non-veterans if general hospitals become overwhelmed, Wilkie said the department is prepared.

“Our first mission is to make sure we take care of our veterans. When the president calls upon us to expand beyond that, we will be ready,” Wilkie said.

“Not just with actual physical resources, but we do have an equivalent of a reserve force of medical professionals who are usually deployed in natural disasters. So we have that capability. Now the Army and the Navy are stepping up their contributions. That’s a good thing. But we stand ready when the president calls us. We’re ready if needed.”

He noted that the VA has four missions. The first three are veterans health care, veterans benefits, and running national veterans cemeteries. The fourth is supporting the federal government in response to disasters and pandemics.

Trump tapped Wilkie to run the VA in the summer of 2018. One of the major department reforms during the Trump administration was the expansion of telehealth, which allows veterans to contact doctors remotely instead of in-person visits when possible.

“Now, for our veterans who would normally access our facilities, we have an outlet for them that most, if not all, health care systems in the country do not have, and that’s telemedicine, telehealth,” Wilkie said. “I have a large budget for telehealth.”

In making the tough decisions early on, the VA system is prepared should things get worse.

“We started stockpiling material at the beginning of last month. We have a stable supply,” the secretary said.

The VA also established 19 emergency operations centers across the country in February that gather information on VA centers and coordinate with other agencies such as the departments of Homeland Security and of Health and Human Services, as well as the Federal Emergency Management Agency.

“They are sort of like military op centers,” said Wilkie, a former under secretary of defense, who has served in both reserves for the Air Force and the Navy at different points.

“They look at the flow in and out of our hospitals. They look at supplies. They look at what the community outside of VA is doing. They connect with HHS, DHS, and FEMA, and provide information into those entities. They are also to tell us if we need more supplies in a certain area or if we have enough supplies in those certain areas where we could better use those assets. So it’s like a war room.”