Trump Talks VA Reforms: ‘Get Out of Here, You’re Fired’ 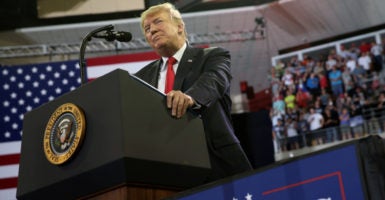 President Donald Trump holds a rally in Duluth, Minnesota, where he talked about his achievements, especially the reforms for veterans. (Photo: Jonathan Ernst/Reuters /Newscom)

President Donald Trump regaled a large crowd in Minnesota Wednesday with tales of his achievements, a major one being reforms of the Department of Veteran Affairs.

The president signed the Veteran Affairs Accountability and Whistleblower Protection Act into law in late June 2017, correcting long-standing accountability issues and ensuring that those incompetent individuals who failed to adequately serve America’s veterans did not remain on the payroll. Trump previously described the VA as “probably the most incompetently run agency in the United States.”

The purpose of this legislative reform was to prevent some of the scandals and disasters of the previous administration, which included the death of veterans who received improper care.

“For the veterans, we passed the largest VA reforms in half a century, a landmark VA accountability law,” Trump said Wednesday evening. “You know what that is? You couldn’t fire anybody that worked in the VA. They were sadistic in some cases, they were lazy. The accountability, you could forget it. So we passed a bill that they have been trying to pass for almost 40 years.”

“It’s called VA accountability,” he explained. “Now, you bring the person into the office and you say, ‘Jim, I’m sorry to tell you, you are fired. Get out of here.’” The crowd went wild as the president shouted out his famous catchphrase.

As of early July, the president’s Department of Veterans Affairs had terminated more than 500 employees in an effort to remake the agency.

During Wednesday’s rally, Trump also highlighted the raise he provided American service members and the passage of veterans choice, which is designed to provide veterans “the care they deserve.”