What a Wounded Veteran Thinks of Trump’s VA Reform 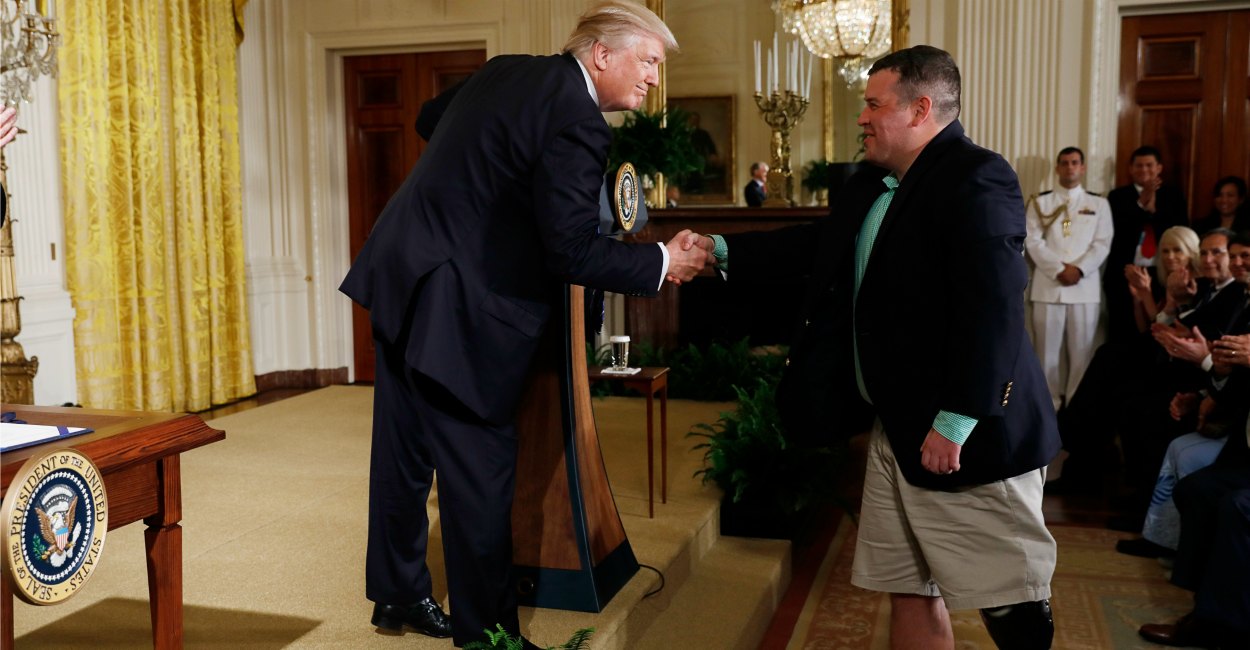 Sgt. Mike Verardo’s military career ended seven years ago because of an improvised explosive device in Afghanistan, but he said the worst part of his injuries was dealing with a “broken VA” when he returned home.

He had to go to the Department of Veterans Affairs hospital weekly, wait 57 days for a prosthetic leg, make long drives to VA medical centers to verify he had injuries and undergo more than 100 surgeries. He said the doctors were patriotic and cared about veterans, but much of the bureaucracy failed those returning home from war.

“When I came home it was incredibly difficult going once a week to the VA trying to get the basic care that I needed,” Verardo told The Daily Signal in an interview at the White House shortly after President Donald Trump signed legislation to hold VA staff more accountable and improve service to veterans.

In the East Room, surrounded by veterans groups, Trump signed the Department of Veterans Affairs Accountability and Whistleblower Protection Act of 2017.

The bill was set up to create a new streamlined process to remove, demote, or suspend any VA employee for poor performance or misconduct. It also provides expanded protections for whistleblowers and bars the VA from using this removal authority if the employee has an open whistleblower complaint.

The new law also allows the VA secretary to to reduce an employee’s federal pension if he is convicted of a felony that influenced his job at the VA and to directly appoint individuals to the positions of medical center director at VA centers.

“President Trump definitely engaged with the veterans on his campaign. He definitely listened to what we had to say,” Verardo told The Daily Signal.

During his remarks, Trump asked Verardo to stand up and the president shook his hand. Trump joked, “He gets up better than I do.”

“What happened to Michael is happening to many but it’s rarely happening under our leadership and David’s leadership,” Trump said, referring to VA Secretary David Shulkin.

The president talked about the 2014 VA waiting list scandal, in which the department’s inspector general determined that some VA medical centers’ falsified waiting lists led to denied care and in some cases deaths.

“We all remember the nightmare that veterans suffered during the VA scandals that were exposed a few years ago. Veterans were put on secret wait lists, given the wrong medication, given the bad treatments, and ignored in moments of crisis for them,” the president said.

Many veterans died waiting for a simple doctor’s appointment. What happened was a national disgrace, and yet some of the employees involved in these scandals remained on the payrolls. Outdated laws kept the government from holding those who failed our veterans accountable.

Shulkin talked during the bill signing ceremony about how the department could not fire employees with a record of driving under the influence or an employee who watched pornography during work hours. Still, he said the purpose of the new law is not to fire more people but to set up a culture of higher standards at the department.

During a press conference at the White House after the bill signing, Shulkin told The Daily Signal:

Every organization needs to see whether something works and whether you need to make changes. So it won’t surprise me if we’re going to need to ask for further legislative changes. Frankly, I’m looking for additional support on the hiring piece because getting the right people in place not only involves removing people that have lost their way but more importantly it involves attracting the very best and the brightest to serve our country’s veterans. And it still takes too long to do that and we’re still too restrictive so I’m going to be looking for help in that area.