Amid Coronavirus Upheaval, How to Keep Employees and Employers Connected to Jobs 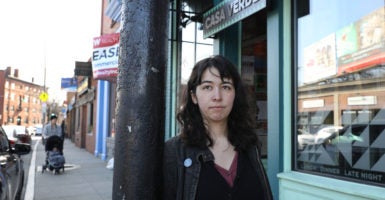 Cloie Logan, 24, pictured Wednesday in Boston, was laid off from two part-time jobs because of restaurant closures during the COVID-19 pandemic. During that week, Massachusetts received 19,884 new unemployment claims in one day—more than the number for all of February. (Photo: Pat Greenhouse/The Boston Globe/Getty Images)

The economic fallout from the national emergency over the coronavirus outbreak could last much longer than the health consequences. To limit disruption of economic activity, policymakers must act now to help families maintain their income and their connections to employment.

Before the coronavirus hit the United States, first-time unemployment claims were near a half-century low. Those days are gone—at least for now. In just one week, from March 7 to March 14, initial unemployment claims jumped by a third, rising from 211,000 to 281,000.

We don’t yet know how many of these workers have been laid off rather than furloughed, but we do know further jumps of even larger magnitude will follow in coming weeks.

Employees who lose their jobs often lose their health insurance and their attachment to the labor force. That’s bad not just for them and their families, but for employers and government as well.

For starters, unemployment insurance typically replaces only about half of workers’ wages up to a cap. Depending on the state, part-time and self-employed workers may not be eligible for benefits at all. Moreover, it could take weeks for workers to receive benefits—even longer when there’s a rapid increase in claims.

Losing workers is bad for employers because recruiting and training new workers is costly. And prior to this recent disruption, employers were hard-pressed to find the workers they needed and were doing things like offering new benefits and added flexibility to attract and retain workers.

That’s why it’s so important to keep people connected to their jobs amid the COVID-19 emergency.

The problem now facing many employers—particularly smaller ones—is that they do not have the cash flows to keep sending paychecks to workers on leave.

The Families First Coronavirus Response package signed into law by President Donald Trump after it was approved by the House and Senate exacerbated this problem by requiring businesses previously unable to afford paid sick leave and family leave to provide it, somehow, all the same.

Employers don’t want to lay workers off, but when faced with having to pay them for up to 60 days of leave and then filing for a credit that they most likely cannot receive before July, laying off or furloughing workers may be the only way they can stay in business.

Policymakers can make it easier for businesses to keep more workers on their payrolls by building on the measures already enacted.

The credits that employers can eventually receive as reimbursement for the paid sick and family leave mandated by the Families First Coronavirus Response Act should be made available to businesses as soon as possible, as refunds that can be reconciled against future tax filings.

Moreover, these paid leave benefits—and the subsequent credits to employers—should extend not just to workers who are sick, caring for sick family members, or caring for children whose schools and child care centers have closed.

The benefits should also go to workers whose hours and pay have been cut due to disruptions in business operations. This should include all workers, regardless of whether they work for a large company (over 500 employees) or a small business.

Broadening the group of eligible workers and making sure employer credits are available quickly can help keep more people connected to their current jobs.

If millions of people become unemployed and lose their livelihood and health care, the consequences could be more severe than the virus itself. It may be more cost-effective for the government to pay workers’ wages for a short period than to let massive unemployment tank government revenues and spike deficits.

Adding to our already precarious debt is an action that should not be taken lightly. Even while the economy was expanding, the federal government was living beyond its means, spending 20% more than it was taking in.

But this is an emergency. And in this case, using future taxpayers’ dollars to provide targeted relief to workers experiencing temporary disruptions is the right solution.

Moreover, providing assistance directly to affected workers will also benefit those workers’ employers and reduce the need for disconcerting and selective bailouts to big businesses.