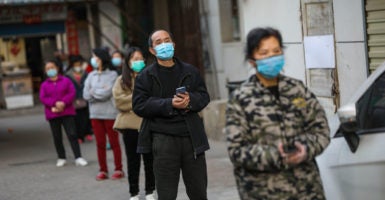 Residents line up to pick up pork that was delivered to their quarantined compound in Wuhan, China, March 18, 2020. (Photo: STR/AFP/Getty Images)

Media rhetoric surrounding what to call the coronavirus echoed the Chinese government’s aggressive propaganda campaign designed to absolve the communist regime of wrongdoing.

Both China and members of the establishment media have focused on President Donald Trump’s habit of referring to the virus as a “Chinese virus” or the “Wuhan virus,” which both the communist regime and media members have said is racist.

The media outcry belies the fact that establishment outlets have also referred to the coronavirus, formally named COVID-19, as “the Chinese virus” and “the Wuhan virus.” The New York Times, for example, has used both terms in reference to the virus, but is now painting Trump using the same language as problematic.

Even Chinese state media initially referred to the virus as the “Wuhan coronavirus.”

But that hasn’t stopped both establishment media sources and the Chinese regime from now declaring the terms to be out-of-bounds.

MSNBC anchor John Heilemann said on air Wednesday that Trump’s use of the term “Chinese virus” is “nakedly racist and obviously racist and blatantly racist.”

The rush to label the terms as “racist” comes as the Chinese government has amped up propaganda worldwide in an attempt to eschew taking responsibility for the global pandemic.

The oppressive regime has denounced “racist” attempts to link the virus—which originated in China—to China, while at the same time falsely accusing America of bringing the virus to China.

China’s propaganda apparatus is also spinning a false narrative in which China bought the world time by acting swiftly against the virus.

“Many media outlets have criticized the White House for squandering the precious time China has bought the world to fight against the virus,” claimed a Tuesday article in Xinhua News, a state-run Chinese outlet.

In reality, China robbed the world of time to fight the virus by engaging in a cover-up. One study estimated that China could have prevented up to 95% of the global outbreak if it hadn’t concealed and then downplayed the virus’ existence.

Xinhua’s article claimed the term “Chinese virus” was an attempt by the U.S. to “scapegoat” China—a message that NBC News correspondent Richard Engel echoed on air the following day.

“If you look at what happened during the Middle Ages, there was lots and lots of scapegoating against an ethnic group or a religious group whenever there were pandemics that affected society and frightened a lot of people, and China certainly feels that that is what is happening now with people calling it the ‘Wuhan flu’ or the ‘Wuhan virus’ or the ‘China virus,’” Engel said on NBC sister network MSNBC.

“This is a virus that came from the territory of China but came from bats,” Engel continued. “This is a bat virus, not a China virus.”

Racism is not the right tool to cover your own incompetence pic.twitter.com/LmGDyPsULt

American politicians “even went so far by employing racist language to label the pathogen behind the disease the ‘Chinese virus’; or ‘Wuhan virus,’ although its origin remains undetermined and viruses have no nationalities,” Xinhua asserted on Tuesday.

Some journalists have rejected the establishment media’s rush to denounce terms like “Chinese virus” and “Wuhan virus.”

“Those American critics who raise the racism canard are themselves inadvertently collapsing the distinctions between an authoritarian regime and those who live under it. Too many also seem comfortable drawing moral equivalencies between the Chinese regime and Donald Trump,” noted The Atlantic writer Shadi Hamid.

“This attitude is hard to take seriously. Trump didn’t block the media from reporting on the coronavirus; he did not disappear his critics. The nature of a regime matters. And this is why I, for one, am glad to live in a democracy, however flawed, in this time of unprecedented crisis,” Hamid added.

“The Chinese government is working overtime to blame the CIA and anyone else for their failings,” he continued. “The name should indicate exactly where it came from so they can’t gaslight future generations.”