Trump’s Retort to Media Suggestions of Racism on Coronavirus: ‘It Comes From China’ 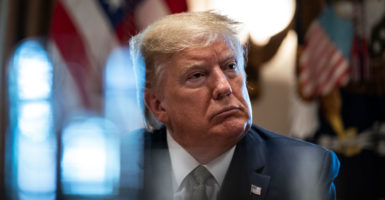 "I know where it came from," President Donald Trump says of COVID-19. Pictured: The president leads a meeting Tuesday with travel and tourism industry executives to discuss the coronavirus pandemic in the Cabinet Room of the White House. (Photo: Drew Angerer/Getty Images)

President Donald Trump hit a nerve with some in the news media Wednesday when he opened his press briefing on the coronavirus by saying: “I would like to begin by announcing some important developments in our war against the Chinese virus.”

In response to repeated questions, Trump said several times: “It comes from China.”

But before some reporters objected, Trump announced that his administration will invoke the Defense Production Act, a 1950 law that allows the president to direct the private sector to increase manufacturing and distribution of emergency medical supplies.

The law is a top source of presidential authority to speed up supply of resources from the U.S. industrial base to support military, energy, and homeland security programs. Congress passed it in response to U.S. involvement in the Korean War.

The administration also is considering a $1 trillion “stimulus” package, but the president said the numbers aren’t settled yet.

Even after the Chinese communist government expelled  journalists from three major American newspapers who were covering the coronavirus story, a pared-down White House press corps bombarded Trump with questions about whether it’s racist to identify the pandemic as originating in China.

“It’s not racist at  all. It comes from China. I want to be accurate,” Trump said of the coronavirus, adding:

I have great love for all of the people from our country. But, as you know, China tried to say at one point—maybe they stopped now—that it was caused by American soldiers. That can’t happen. That can’t happen. Not as long as I’m president. It comes from China.

As of Wednesday, the Centers for Disease Control and Prevention has reported 7,038 cases of COVID-19 in all 50 states and 97 deaths, an increase from the 75 deaths reported the day before. Several media reports, however, show the number of deaths as 114.

Officials in China’s Foreign Ministry last week suggested the U.S. Army planted the coronavirus in Wuhan, the capital city of China’s Hubei province, where the first case was diagnosed.

After the initial cases surfaced late last year, the Chinese government sought to cover up the virus before it began spreading across the world.

“I know where it came from,” Trump responded to a later and similar question from Yamiche Alcindor, White House correspondent for “PBS NewsHour” suggesting that connecting China to the disease is racist.

“I don’t know if you would say China is to blame. Certainly we didn’t get an early run [notification] on it. It would have been helpful if we knew about it earlier. But it comes from China. It’s not a question about that. Nobody is questioning that.”

Asked about a comment by Sen. Tom Cotton, R-Ark., that the Chinese government eventually should pay some type of penalty to the rest of the world for the spread of COVID-19, Trump only said that he has a lot of respect for Cotton.

“There are those people who say that,” the president said of Cotton’s proposal, then called on another reporter.

A reporter asked Trump, known for being a critic of the U.S. media, about the Chinese government’s kicking out reporters from The New York Times, The Wall Street Journal, and The Washington Post.

“I have my disputes with all three of those media groups. I think you know that very well,” Trump replied. “But I don’t like seeing that at all. I’m not happy about that at all.”

“Do you believe that China is inflicting this upon our country?”

“No, I don’t believe that they are inflicting it,” Trump replied. “I believe they could have given us a lot earlier notice.”

Another reporter asked: “Do you think using the term ‘Chinese virus’ puts Asian Americans at risk, that people might target them?”

Trump responded: “No, no, no. I think they would probably agree with it 100%. It comes from China, there is nothing to disagree on.”