The Upside of ‘Price Gouging’ 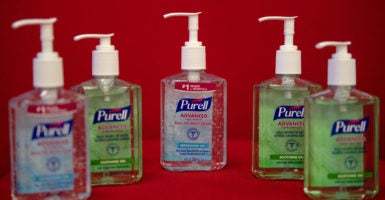 People are stocking up on things, fearing that we will be stuck in our homes, under quarantine, without essential supplies.

Some hoard toilet paper. A popular internet video features someone driving up to what appears to be a drug dealer but is really someone selling toilet paper.

When it became hard to find hand sanitizer in New York, Gov. Andrew Cuomo said the state would produce its own, made by prison labor.

Yet in-demand items like masks and hand sanitizer can still be found. It’s just that we have to pay an inflated price.

People on social media are outraged by that. They post pictures showing stores charging high prices, like $19.99 for a can of Lysol spray and $22.99 for a 12-ounce bottle of Purell.

We’re encouraged to report such high prices to the government because “gouging” is illegal. New York has an online “price gouging complaint form” that people can fill out if they are charged “unconscionably high prices.”

“On my watch, we will not tolerate schemes or frauds designed to turn large profits by exploiting people’s health concerns,” said New York’s economically clueless Attorney General Letitia James. “Some people are looking to prey on others’ anxiety and line their own pockets.”

People always look for ways to line their own pockets.

But what politicians call “gouging” is just supply and demand. Prices rise and fall all the time.

Most states’ anti-gouging laws never even say exactly what is “unconscionably excessive.” That invites abuse. Vague laws give politicians dangerous power. They can use anti-gouging law to punish any merchant who doesn’t give them money or kiss their rings.

It seems cruel to charge customers more during a crisis, but when there are no laws against sharp price increases, people don’t experience long lines and shortages.

Think about what happens when stores don’t raise their prices: People rush to buy all they can get. The store sells out. Only the first customers get what they want.

But if the store charges more for items in extraordinary demand, people are less likely to hoard. Customers buy what we need and leave some for others.

Prices should rise during emergencies. That’s because prices aren’t just money; they are signals, information. They tell suppliers what their customers want most.

Entrepreneurs then make more of them and work hard to get them to the people who need them most. If “anti-gouging” laws don’t crush these incentives, prices quickly fall to normal levels.

In a video, Stossel in the Classroom contest winners explained that.

Last week, some people bought lots of hand sanitizer and masks and then sold them on the internet. One couple boasted that they made over $100,000 reselling Lysol wipes.

They’re not bad people. Their actions allow people desperate for supplies to buy what they need, even if it’s at a higher price.

We’re supposed to stay indoors, so it’s good that we can get these products online. Then we don’t leave home and infect others.

Unfortunately, Amazon, eBay, and Facebook, worried about accusations of “profiteering,” cracked down on resellers. The companies removed listings for masks, hand sanitizer, and disinfectants.

This will only cause more shortages. Bigger profit was what encouraged people to sell online. Now no one gets those products until the market returns to normal.

The French company didn’t do it only because they want to help people in China. Extra profit motivated them.

Price “gouging” saves lives. In a crisis, we like to think that everyone will volunteer and be altruistic. But it’s not realistic to believe that all will.

If we want more supplies, we ask sellers to risk their money, their safety, and comfort. (Sellers often travel long distances to reach people most in need.) Most sellers won’t do that unless they’ll profit.

Government should dump its anti-price gouging laws and let the free market help those in need.