US Government and Politicians Must Unite to Fight the Coronavirus 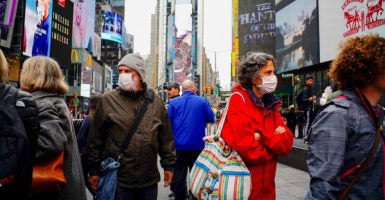 The scope of the coronavirus outbreak is expanding, but it’s vital for U.S. policymakers and citizens to act rationally, work together, and keep what’s happening in proper context.

People have many legitimate concerns about the coronavirus, including mitigating the spread, manufacturing enough test kits to detect the virus in sick people, finding an effective treatment, preventing shortages of protective gear for medical personnel, and offsetting potential costs to the taxpayers and to the economy, among many others.

As Virginia’s former secretary of health and human resources, I know how critical it is for federal, state, and local governments to work together in public health emergencies like this one.

It’s also critical that they can quickly disburse federal dollars to state and local health departments to pay for diagnostic tools, treatments, and quarantines.

The Trump administration and Congress have taken some decisive steps, including passing a comprehensive funding package that provides state and local governments with direct financial support and funding to help hospitals and health centers increase their ability to handle a potential influx of coronavirus cases.

The bill also contains money for the research and development of a vaccine and diagnostic tools. President Donald Trump and administration officials have also met with drug companies to push for a vaccine and look for ways to ease regulatory obstacles to finding one.

In addition, the Federal Emergency Management Agency has more than 50 teams prepared to assist states and territories, and the administration is considering using a program that helps victims of natural disasters to cover the hospital costs of uninsured Americans who contract the coronavirus.

The administration has worked to slow the spread of the illness with travel restrictions, mandatory quarantines and screenings, and public information about commonsense public hygiene practices.

It suspended entry into the United States for most non-U.S. citizens coming from China and Iran, as they may pose a more serious risk of transmitting the disease. Both countries are suspected of covering up the extent of the outbreak.

The administration has also instituted a mandatory quarantine of Americans returning from China and added screenings for travelers from Italy and South Korea.

The administration should also focus on producing and deploying test kits and ensuring the preparedness of the health care system, which could be stressed in the coming months due to the outbreak.

Vice President Mike Pence is the natural choice to lead the federal response. It’s essential to have a coordinated effort among all the federal agencies that have a part in responding to the outbreak. As vice president, Pence has the cross-departmental authority the task requires, and as a former governor, he has the necessary management skills.

As the battle gets into full gear, now is the time for national unity, not playing politics with public health. Unfortunately, far too many politicians are using this situation for partisanship rather than problem-solving.

Additionally, if more federal funding is needed, Congress shouldn’t see the coronavirus epidemic as an opportunity to add extra spending that isn’t pertinent to solving the crisis.

The funding bill that passed last week contained more than a billion dollars for foreign aid programs and subsidies for private business with financial losses stemming from the outbreak.

The federal government’s priority should be providing the resources needed to mitigate the spread of coronavirus and find a treatment—not to load up a must-pass bill with unrelated wish-list items.

While people are looking to government for solutions, we also have to realize that a huge part of fighting COVID-19 can be found in exercising personal responsibility—good personal hygiene and commonsense social practices will go a long way in helping to prevent further spread of the virus.

Based on current projections, a majority of people who contract the virus will only experience mild-to-moderate flu-like symptoms. The elderly and those with compromised immune systems seem to be the most affected.

As of March 9, the coronavirus has infected slightly more than 540 people in 34 states and Washington, D.C., with 22 of those patients dying from the illness. Because there aren’t enough test kits to meet current demand, the number of cases detected will likely increase as testing capacity grows.

Subduing this epidemic will require the combined efforts of government at all levels, the private sector, and the American people. While there are many unknowns right now and the outcome is uncertain, we’ve survived far worse, and together, America will do so again.