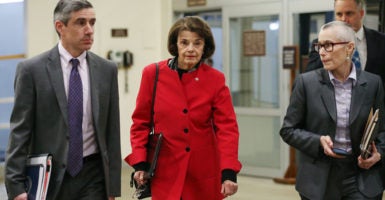 As the Senate debates an expensive and wasteful new energy bill, Sen. Dianne Feinstein, D-Calif., has proposed an amendment to launch a pilot program for interim storage of nuclear waste from commercial nuclear power plants.

It’s a complex policy problem with plenty of nuance. But this amendment basically resuscitates the Obama administration’s approach, offers only a patch to a broken system, and removes an incentive to fix the real problem.

The amendment has new traction thanks to the Trump administration’s recent arguments in budget hearings to pursue “innovative” approaches and walk back its previous commitment to finish the review of a long-term repository at Yucca Mountain as required under the Nuclear Waste Policy Act.

The 1982 law requires the nuclear industry to pay the Department of Energy to build and dispose of nuclear waste in a permanent government repository, which the department was supposed to begin doing by 1998.

The Feinstein amendment unwisely would alter that check. It directs the Department of Energy to create a pilot program “to license, construct, and operate one or more Federal consolidated storage facilities to provide interim storage” for nuclear waste from power plants that no longer have any operating nuclear reactors. There are 23 such locations.

A “pilot program” usually signals there is something to be figured out or tested before going full bore. The Feinstein amendment suggests three such items: licensing an interim storage site through the Nuclear Regulatory Commission, transporting nuclear waste, and demonstrating safe storage.

Consider the pilot finished before launch then, because in each case there is enough experience:

Without much-needed deeper reform of the Nuclear Waste Policy Act, interim storage solves only one problem: It reduces the Department of Energy’s liability in courts for failure to collect waste from commercial nuclear reactors on time.

To its credit, the amendment directs the government to estimate reductions in liability as a result of government action—information that for too long has been ignored by Congress.

Yet the amendment creates new problems. It ignores the important check Congress put in place to incentivize progress on the permanent repository that’s needed.

Under the flawed framework of a government monopoly on nuclear waste management, interim storage merely delays action yet again.

It also presumes, likely naively, that a state will welcome a pilot interim storage facility when policy for permanent disposal is in utter disarray.

In the past, communities have expressed interest in housing nuclear waste, among them: Wyoming, New Mexico, Texas, Utah, and Nevada (Nye County, where Yucca Mountain is located). But in the end, no communities have wanted to take it because of the distinct possibility they will become a de facto permanent storage site at the mercy of an unreliable partner in Washington.

In fact, the Feinstein amendment all but acknowledges that there is no plan or ability to answer that objection: It requests from the Department of Energy “recommendations for a mechanism to ensure that any spent nuclear fuel” stored at a consolidated storage facility “shall move to deep geologic disposal.”

Under the existing broken framework of the Nuclear Waste Policy Act, this interim storage proposal is a shortcut leading to nowhere.