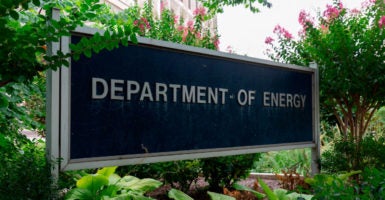 The Energy Department was required by law to begin collecting nuclear waste from commercial nuclear reactors by 1998, and yet Congress has failed to fund this work or provide clear policy leadership. (Photo: Alastair Pike/AFP/Getty Images)

Don’t get me wrong. I love nuclear energy and think it has the power to change the world for the better. But Congress is working its way toward creating a new, $230 million-plus subsidy program for the nuclear energy sector that’s a waste of taxpayer resources, is problematic for the industry, and that totally ignores issues where congressional leadership is desperately needed.

Plus, it’s doing it in the least transparent way.

As of Tuesday evening, Congress was trying to push through a massive spending bill to President Donald Trump’s desk in order to avoid a self-imposed government shutdown on Dec. 20. The House passed HR 1865, covering the bulk of the spending, on Tuesday, sending it on to the Senate.

In the spending bill, the Department of Energy’s budget gets a boost from last year (which itself was an increase from the year before). Hidden in the separately attached explanatory statement are directions from Congress for the Energy Department to create a new, advanced nuclear reactor program that mirrors much of the Nuclear Energy Leadership Act proposed earlier this year, but never voted on or scored by the Congressional Budget Office.

Briefly, the proposal calls for the Energy Department to solicit two new, advanced reactor designs and to construct and demonstrate the viability of nuclear reactor technology.

The trouble is, we’ve tried all this before. The Nuclear Energy Leadership Act, and with it the spending bill before Congress, basically reproduces the Energy Policy Act of 2005.

The federal research and development, advanced reactor loan guarantees, cost-sharing programs for licensing activities, and a public-private partnership to construct reactors for research, development, and demonstration created in 2005 remain largely unfulfilled or abandoned.

And yet, here we go again.

In fact, such a program is entirely unnecessary. For example, Oklo Inc. is an advanced reactor company that is progressing through the demonstration and regulatory steps without a big government handout. And yet what Congress seems to be proposing in this spending bill is for the government to do the work of other private companies.

It’s entirely unfair to companies that have succeeded on their own merits to win investors and customers.

While subsidies may spur some amount of commercial activity, it’s limited only to what is subsidized. And that’s the second real danger of the new Energy Department program Congress is trying to create in its spending bill.

The program inherently puts Energy Department  bureaucrats—rather than investors and customers—in the position of narrowing the field of the many advanced reactor technologies being perfected in the U.S. right now. That cannot help but narrow the scope of innovation to the few companies and technologies that win Energy Department approval.

It also creates a new barrier to entry for companies that choose not to—or otherwise do not—meet the parameters of the Energy Department’s demonstration program.

Regardless of their technical merit, the companies left out may appear riskier to potential investors and customers simply because they don’t have the Energy Department’s stamp of approval or interest.

The Energy Department was required by law to begin collecting nuclear waste from commercial nuclear reactors by 1998, and yet Congress has failed to fund this work or provide clear policy leadership.

That failure is costing Americans over half a billion dollars a year in lawsuits between the U.S. government and nuclear power plants stranded with nuclear waste.

The nuclear industry has no future in America if it cannot prove to customers that nuclear waste will be safely handled. Unfortunately, current law puts that issue squarely in the hands of government rather than the industry.

If Congress were really interested in helping the nuclear industry—both existing nuclear power plants and the advanced reactors of tomorrow—it would drum up the courage to take the next steps on nuclear waste policy, rather than hope no one notices and shuffle along the costly status quo.