8 Developments in the Trump Administration’s Response to Coronavirus 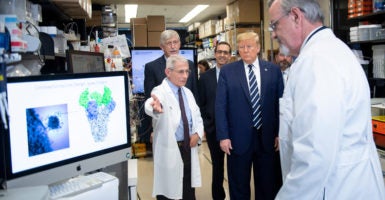 Anthony Fauci, left, director of the National Institute of Allergy and Infectious Diseases, discusses the fight against the coronavirus Tuesday with President Donald Trump during a tour of the Vaccine Research Center in Bethesda, Maryland. (Photo: Brendan Smialowski/ AFP/Getty Images)

President Donald Trump on Tuesday visited the National Institutes of Health’s Vaccine Research Center to learn more about the fight against the coronavirus.

“You have to confront it,” Trump said of the disease. “You have to do a lot of good work.”

About 2% of those known to be infected with the coronavirus have died, while about 5% have developed serious infections, based on data from China reported in The Wall Street Journal. In Washington state, nine deaths have been attributed to the coronavirus as of Tuesday evening.

The elderly and those with compromised immune systems have been the groups most affected. Children, usually also a vulnerable demographic, have not yet been heavily affected by the virus.

Officials have identified 92,000 cases around the world, and 48,000 have recovered from the virus.

“The administration’s response has been very solid under very difficult circumstances, including a lack of early warning of the epidemic out of China,” Peter Brookes, senior research fellow for national security and foreign policy at The Heritage Foundation, told The Daily Signal.

“Unfortunately, with the large number of questions we’re still trying to answer about the virus and its effects, a sustained campaign of care and communication is going to be needed,” Brookes said.

Here are eight major developments in how the federal government is responding to the coronavirus.

1. Testing Kits on the Way

Vice President Mike Pence and other members of the coronavirus task force briefed reporters in a no-audio, no-video conference Tuesday at the White House. Pence said 77 cases have been identified in a total of 13 states.

“Any American can be tested,” the vice president said.

Previously, testing was restricted based on symptoms. But Pence said kits for testing 1 million people would be shipped immediately.

“It is not necessary for the American people to buy masks,” the vice president said.

2. Paying for the Uninsured

The Trump administration is considering using a natural disaster program designed to cover the hospital costs of uninsured Americans who contract the coronavirus, The Wall Street Journal reported.

The program is typically used for natural disasters such as hurricanes and tornadoes, and reimburses hospitals and medical facilities. The program pays about 110% of Medicare rates for treating patients, such as those evacuated from hard-hit areas.

The Journal reported that the Centers for Medicare and Medicaid Services has been in discussions about using the program to pay providers that treat uninsured patients with the coronavirus.

Secretary of Health and Human Services Alex Azar announced during the briefing that Trump is donating his $100,000 fourth-quarter salary to HHS to fight the virus.

The visit Tuesday to the vaccine research center at Walter Reed National Military Medical Center in Bethesda, Maryland, took place one day after Trump and administration officials met with drug companies at the White House to push for a vaccine.

“I met yesterday with the biggest drug companies—Pfizer, Johnson & Johnson, and many of the other great companies,” Trump said earlier Tuesday when speaking to the National Association of Counties’ Legislative Conference in Washington.

“Many great things are happening, and they are happening very fast,” the president said. “I said, ‘Do me a favor. Speed it up.’ And they will. They are working very hard.”

“We are moving at a maximum speed to develop therapies, not only the vaccines, but the therapies,” Trump told the county officials. “Therapies is sort of another word for cure, where it helps get the people better faster.”

Trump suspended entry into the United States by certain foreign nationals who recently traveled to China and who pose a risk of transmitting the disease.

“I ordered sweeping travel restrictions and did them very early, as you probably have heard, earlier than people wanted me to do them. And it turned out to be a wise decision,” Trump told the county officials. “We increased travel advisory levels, increased screening measures, and imposed historic quarantines.”

“We ask all of you to share information about basic health and safety practices with your communities back home,” he said.

The administration imposed travel restrictions on most noncitizens coming from China and Iran to the United States, while also instituting a mandatory quarantine of Americans returning from China.

Further, airport screenings have been expanded to identify anyone showing symptoms, according to the White House.

Federal Reserve Board Chairman Jerome Powell announced an emergency reduction in interest rates, fearing an adverse impact on the economy from the coronavirus. The reduction takes the benchmark U.S. interest rate down from 1.75% to just below 1.25%.

The cut was just one-half of a percentage point, but such an emergency cut hasn’t been made since 2008 on the cusp of a recession, The Washington Post reported.

“We don’t think we have all the answers, but we do believe our action will provide meaningful support to the economy,” Powell said. “It will support accommodative conditions and avoid a tightening of financial conditions, and it will help boost household and business confidence.”

The Trump administration has declared a public health emergency and utilized reserved funding to help support response efforts to the virus, including increased education to help identify cases.

“America has the world’s most advanced health system. We know that our county health officials play a front-line role in battling public health threats,” Trump said.

“We are working with Congress very closely to pass supplemental legislation that ensures state and county health departments get everything they need,” he said. “I asked for $2.5 billion. It looks like they are going to give us $8.5 billion. I don’t think that has ever happened to me before.”

Pence communicated Monday with all 50 governors to continue coordination of state and local officials to prepare for and respond to the coronavirus.

The Centers for Disease Control and Prevention has worked with state health departments regarding travelers returning from overseas.

Additionally, 62 public health emergency preparedness programs are part of the multiagency infrastructure working on quarantine, protecting health care workers, and ensuring medical supply chains, among other things, according to the White House.

The Federal Emergency Management Agency has more than 50 teams prepared to assist states and territories. The Department of Housing and Urban Development is communicating with public housing authorities and providers of services to the homeless.

Acting Homeland Security Secretary Chad Wolf told the House Homeland Security Committee on Tuesday that a department facility in King County, Washington, would be closed because of safety concerns about the high infection rate in the state.

“Late last night, the department was made aware of a situation involving a DHS employee, and out of an abundance of caution and following recommended procedure, I ordered a DHS facility in King County, Washington state, to close beginning today and directed those employees to telework, if possible, in order to reduce the threat of community spread of the coronavirus,” Wolf told members of the committee Tuesday, The Daily Caller News Foundation reported.

“At this time, the affected offices will remain closed for 14 days and all employees have been directed to self-quarantine for 14 days,” Wolf said, adding:

From the headquarters level, we began sending all-employee messages on Jan. 22 regarding coronavirus, regarding procedures they need to take as this continues to unfold, and we’ll continue to do so. At this time, a rapid-response team at headquarters is working with the CDC, state and local officials on further guidance.

Rep. Mark Walker, R-N.C., a member of the Homeland Security Committee, wrote to Wolf seeking answers about misinformation spread by China and Iran.

Walker’s letter notes the emerging threat that has spread to 35 countries, confirming cases and severe outbreaks in Italy, Spain, and Iran.

To make matters worse, countries such as China and Iran are suspected of spreading disinformation and hiding the extent of the outbreak. In fact, the Chinese Communist Party (CCP) is accused of covering up the number of infected individuals and the attributable deaths to the virus.

These actions have made the outbreak worse and endangered the rest of the world, who are unable to take the appropriate and necessary actions to respond.