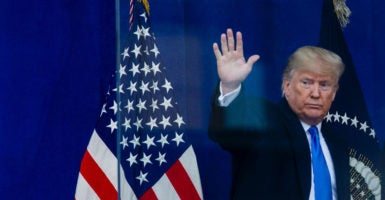 Trump administration officials touted improved health care services for the elderly and military veterans Saturday during a conference of conservative activists near Washington.

Health and Human Services Secretary Alex Azar said the Trump administration has helped elderly Americans by reducing their drug premiums to about 13% and expanding the Medicare Advantage program.

“This president has finally found a way to keep so many veterans out of the emergency room by offering them, for the first time, urgent care,” Wilkie told the crowd at the Conservative Political Action Conference, known as CPAC.

Willkie was referring to a program that allows veterans to go to an urgent care facility for acute illnesses or injuries and another that expands their eligibility to get private health care in the local community.

Veterans who used to have to drive more than 30 minutes to a VA health facility or wait more than 20 days for an appointment now can receive private care, he said.

On the elderly front, Medicare Advantage plans provide benefits through a private health insurer as an alternative to regular, government-run Medicare plans, and are used by about one-third of Medicare recipients, or 22 million Americans.

“Over $2.6 billion has been saved by America’s seniors in the past three years alone in the Medicare Advantage programs, so this is great,” Azar said.

Wilkie, an intelligence officer in the Naval Reserve, said the president is committed to fighting and making progress on the opioid addiction crisis throughout the U.S.

When Charlie Gerow, CEO of Quantum Communications and moderator for the discussion, asked about the result for veterans, Wilkie said it was “astronomical.”

Wilkie said the VA has reduced opioid prescriptions by 51%, but the agency wants more Americans such as those attending CPAC to understand the changes necessary to combat the crisis among veterans:

It is about changing the culture. It is about treating the pain instead of the brain. It is about taking warriors and offering them new solutions like yoga and tai chi, things that get at the source of their distress.

Wilkie said his father, a career Army officer who saw action in Cambodia during the Vietnam War, never would have thought of receiving medical care in the form of yoga or tai chi. He added: